Calculated MINIMUM reparation due to slave descendants: $1.5 million to each Black citizen of the USA 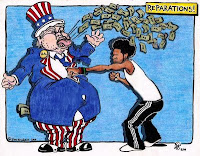 It is not difficult to calculate a MINIMUM amount of monetary reparation due to every single Black slave descendant living today in the USA.

If we leave out the reparations for physical violence, genocidal stress, inadmissibility to superior social classes, etc., and only take into account the stolen labor, at the today's equivalent minimum wage, then the calculation for the minimum amount due to the descendants of slaves is a simple one, as follows.

This calculation includes only the money due to ancestors and their descendants, in terms of the stolen actual labor counted in person-hours, based on a minimal economic value of that labour, adjusted at a lowest reasonable rate of interest.

Every step in the following calculation will use the lowest possible evaluators, such as to produce a MINIMUM amount due.

In the 70 year period between 1790 and 1860, there were, on average, 2 million slaves at any time in the USA. In the same period the average US population was 14 million.

Moving forward to 2000, the US population was 309 million, with 40 million slave descendants.

To obtain a minimal (under estimated) annual interest rate, we use the population increase from 14 million to 309 million in the 140 years from 1860 to 2000. This gives a population annual growth rate of 2.2%.

Now capital value increase interest rates in the US have been much greater than the population growth rate. Nonetheless, we adopt the underestimate of 2% for the interest rate to be applied to the stolen income value. We further apply the interest rate starting only in 1860, rather than earlier, thereby making our estimate even more of an under estimate.

The value of the stolen labor, for the period 1790 to 1860, at today's US minimum wage of $7.25 per hour is as follows. (Note that using today's minimum wage automatically corrects for valuing the historic currency to its present value.)


The latter one-time payment would be easy for the USA to make, since its annual GDP is $15 trillion. (Think of a wealthy person's annual salary relative to buying a house in a safe neighbourhood.) The USA would not even need to sell any assets to achieve this modest payment.

After the minimum payment is made, it would be appropriate to calculate and pay the addition reparations that are due.

My goal here was to show that these calculations are simple and unambiguous. Understanding the calculated minimum allows one to move forward from that established basis, towards a more realistic reparation number. At the very least, each Black slave descendant can legitimately demand $ 1.5 million payable immediately.

An obvious question that arises from this straightforward calculation is: Why are Black leaders not demanding reparation, as a priority demand?

Denis Rancourt is a former physics professor at the University of Ottawa, and is the author of the book "Hierarchy and Free Expression in the Fight Against Racism". More essays by this author are HERE.

Comments are moderated to control automatic spam. All non-anonymous comments are welcome. -dgr