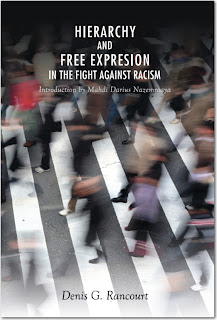 Activist Teacher Denis Rancourt has written a radical ("to the root") book about racism, now available in both paperback and Kindle:


"Hierarchy and Free Expression in the Fight Against Racism"

Denis Rancourt has turned the entire notion of RACISM on its head and at the same time exposes racist acts committed by others to deflect that characterization from sticking at the highest levels of The Academy.  North American civil rights defenders need this book at this time. Rancourt’s deeply incisive Fight Against Racism brings us back to the reality of the struggle, away from the manoeuvring for class advantage and away from the victim’s desire to create illusions of state-given justice.

—Cynthia McKinney, First African-American woman elected to represent Georgia in the US Congressional House of Representatives and former US presidential candidate (Green Party)

I disagree with several of the positions that this book makes, but I agree that censorship does nothing to combat racism, and that is a very important point that almost nobody except Rancourt dares to say.

—Jean Bricmont, Professor of physics at the Catholic University of Leuven and author of Humanitarian Imperialism.

My Review of “Hierarchy and Free Expression in the Fight Against Racism” by Denis G. Rancourt:  As a Black woman who is trained to read text through a critical race perspective, I had difficulties reading this book. It wasn’t the book that was the problem rather it was my theoretical framework. Although I agreed with the tenets in this book, I found the read to be a constant battle as I fought my desire to be part of the status quo. It is an incredible book and I highly recommend it.
Hazel Gashoka
BA (Psychology), graduate student in race studies

You don’t have to agree with Denis Rancourt’s detailed and thorough arguments in order to learn from this book. Rancourt presents us with a challenge that human rights activists should seriously consider.
Anat Matar
Senior Lecturer, Tel Aviv University
Posted by Denis Rancourt at 7:24 AM

Just ordered the book out of curiosity. Let's see if you actually managed to learn something...