On what libertarian leader Tim Moen has learned 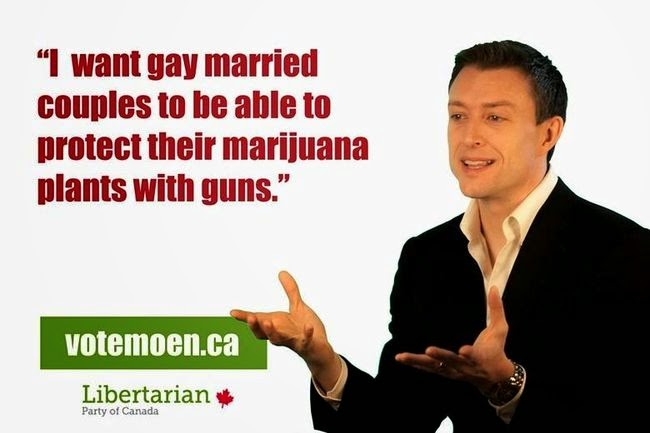 
Tim Moen is a unique political party leader. He actually blogs about his thought process, and expressly considers saying what he actually thinks.

Moen is also somewhat unique in that he convincingly appears to be honest, both in the things he says and in his body language.

Elizabeth May also has that rare quality but audio evidence has shown that she, like the three main-party leaders, is far from a principled individual who does not bow to influential lobbies (LINK).

The leaders of the big parties (Harper, Trudeau, Mulcair) are so empty and machine-like that their words do not lend themselves to meaningful analysis. What they don't do speaks louder than anything that emanates from their mouths.

Since Moen has shared his thoughts about the nature of politics, it is worth examining those thoughts. I will analyze his blogpost "10 Lessons I Learned Running for Parliament", which is the August 26, 2014 entry on his Fort Mac Philosopher blog.

Moen makes ten points, restated here in my own words:

1. Voters, right and left, are afraid, and vote to avoid what they are most afraid of.

Agreed, but Moen avoids the fact that the fears themselves are manipulated and manufactured by governments, and by corporate entities that also fund political parties.

OK but another dominant strategy is to offer fixing or cleaning-up the system that is newly discovered to now be hopelessly broken or corrupt. This is most effective because ordinary citizens know that the system does not work for them.

3. Politicians stick to meaningless platitudes to avoid displeasing their base and arming their opponents.

Agreed, but Moen leaves out that meaningless platitudes also serve to (1) reassure party funders that their man will not go off track, and (2) avoid the risk of awakening voter expectations for real action.

4. Politicians avoid stating their true opinions in order to concentrate on satisfying their base and those likely to vote for them.

True, but Moen omits that politicians also avoid stating their true (conscious or unconscious) designs and the actual policy consequences that follow from their alleged policy intentions. This is the difference between the lip service paid by legislators and jurists about a statute (or law) and the real effects of the statute in terms of removing freedom and maintaining undemocratic control. As such, Moen refuses to acknowledge that the big-party politicians work for the man, virtually without deviation, whether they are conscious of it or simply allowing themselves to be manipulated and hijacked by the process.

5. Voters insist on playing the role of powerless children that depend on politicians to either solve their problems or destroy their lives -- voters transfer all responsibility for both change and stability on politicians.

Well, that may be true of voters but most of us don't vote and don't believe that politicians are meaningful agents of anything. We rightly believe that the politicians with power will do what they do irrespective of whether we vote for them or not.

Refreshingly, Moen recognizes that voter apathy is a consequence of realism regarding the futility of voting (next point).

6. There is voter apathy and dis-involvement with politics.

Here Moen's analysis is confined to the tunnel vision of the individual voter's choice to vote or to not vote. His analysis is blind to the dysfunctional non-democracy that is Canada's Parliament; where big-party leaders veto, fire, and impose riding candidates, force strict party discipline, and determine the issues that are allowed to be addressed, the details of positions on every thus-allowed issue, and all the media talking points of any who are allowed to speak on the allowed issues. That's a big blind spot.

Any honest politician must confront the sham that is the Canadian Parliament, and only politicians who do can be considered honest, unless they are so naive that they should be avoided on that basis alone, in my humble opinion.

Manning understood this. The Manning Reform Party revolution was based on that sort of brilliance, the brilliance of bringing elements of the obvious into mainstream politics. It worked until it was bought out and dissolved.

7. Voter psychology amounts to either seeking a mother (Left) or a father (Right), and this is primarily determined by one's family background.

This is an interesting proposal that merits sociological research. It is truly refreshing to witness a political party leader thinking aloud in this fashion. One can see that Moen is seeking models to understand individual and group psychology as it might apply to political work. This particular model reconciles the right and the left, and legitimizes both as natural consequences of healthy human tendencies.

Moen appears as a conciliator and prefers unifying politics rather than superficial partisan ideology politics. His main challenge is that his party's unifying principle is individual freedom, so he has the job of making individual freedom a dominant societal demand. It has been done on several occasions in history, and the time for another kick at the can may be ripening in Canada?

Systems spontaneously and mechanically evolve towards heightened hierarchical control, which is delayed and set back when the subjects find strong individual and collective impulses to partially break free. This is a constant historical battle in all human societies. Revolutionary gains towards more freedom and personal agency can be achieved either violently or non-violently, depending on the societal circumstances. The only nexus of resistance and push-back against increasing undemocratic dominance is the individual rebellion of liberation. There is a constant battle between the human impulse to be free and influential on the one hand, and the societal forces to heighten the dominance hierarchy on the other hand [1].

8. Change comes from pushing outside of the allowed sterile political discourse.

9. There is hope, as evidenced by individual efforts to "make monolithic institutions irrelevant".

Here Moen makes a high five to all the enterprising individuals who seek to liberate themselves from the system's (monetary, legal, resources, etc.) grip by developing alternatives.

While I agree that these efforts are a testament to the human impulse for liberation, the whole idea of mainstream political involvement is to prevent the dominant system from being too insane, and ideally to reform it towards freedom and actual democracy. In my book (literally), the whole idea is to push back against increasing totalitarianism -- what many and myself have called corporate fascism.

There is no doubt in my mind that alternative consumer and lifestyle strategies will be forcefully destroyed to the degree that they threaten the dominant machine. The idea that modern internet technology or independent food and energy production can offer absolute protection to creative alternists is a total fantasy.

10. "Collecting votes" is no way to change the world.

Agreed, but here Moen makes two theoretical proposals that I believe are invalid, as follows.


First, Moen states that "government is an emergent property of the beliefs and actions of individuals in society". Well, if that were true, then there would be no problem, and there would be no need for Moen's political party. That belief is comforting but it is irresponsibly naive, and incorrect.

Government is the embodiment of undemocratic concentrated power. Nothing could be clearer. One proof, if proof were needed, is the tremendous amount of resources and efforts that go into convincing the public of the legitimacy of the political system and its supporting institutions.

I predict that if Moen continues down that fanciful fairy tale, then he will lose many libertarian supporters and many realistic potential voters. It is a road that leads straight into conformism with the status quo.

Second, Moen advances the proposal that an irreversible tipping point of public opinion occurs whenever "10% of people adopt an unshakable belief". Moen was inspired by an article in ScienceDaily [2], which describes theoretical research published in a high-profile peer-reviewed physics journal [3]. (I will leave the criticism of that published work for another day.)

Moen combines these two proposals (government as emerging from people fantasy and 10% tipping point) to tentatively conclude "Once my party and I win 10% of hearts and minds it really doesn't matter to me which politicians get in front of the new parade."

There is some crumb of truth to this proposal, and it suggests that Moen is realistically concerned with advancing the vision of liberty as his main contribution, rather than forming government. More importantly, however, his model is incongruent with conventional participation in party politics because one does not develop an "unshakable belief" in something of consequence by liking a political figure.

Therefore, one can predict that Moen will continue to search for his own mode of unconventional participation in party politics, designed to cause voter cognitive dissonance, and to maximize occasions for life-changing political discourse.

I hope that he will also be an aggressive agent of criticism, denunciation, and reform of the dysfunctional system itself. How can one create cognitive dissonance while ignoring the elephant in the room?

We will know that Moen has been effective and has touched a nerve when the entire establishment visciously attacks him, or at least is unhinged by him, or at least significant adjusts its discourse to make him irrelevant... Any such sign will be a gauge that freedom is making headway.

[1] My book is predominantly about this societal struggle, and theorizes about its scientific basis: "Hierarchy and free expression in the fight against racism" by Denis G. Pancourt, Stairway Press, 2013.


Dr. Denis G. Rancourt is a former tenured and Full Professor of physics at the University of Ottawa, Canada. He is known for his applications of physics education research (TVO Interview). He has published over 100 articles in leading scientific journals, and has written several social commentary essays. He is the author of the book Hierarchy and Free Expression in the Fight Against Racism. While he was at the University of Ottawa, he supported student activism and opposed the influence of the Israel lobby on that institution, which fired him for a false pretext in 2009: LINK.
Posted by Denis Rancourt at 7:42 AM