Denis Rancourt's letter to president Jacques Fremont of the University of Ottawa, Canada 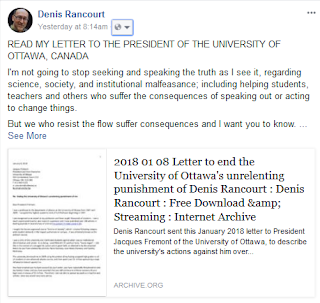 READ MY LETTER TO THE PRESIDENT OF THE UNIVERSITY OF OTTAWA, CANADA (Direct link to the PDF file is here)

I'm not going to stop seeking and speaking the truth as I see it, regarding science, society, and institutional malfeasance; including helping students, teachers and others who suffer the consequences of speaking out or acting to change things.

But we who resist the flow suffer consequences and I want you to know.

It is difficult to grasp everything Canada's University of Ottawa has done and continues to do to me, yet it is true, and I have been dedicated to finding it out. I know other public institutions behave the same way but we rarely find out.

The university secretly destroyed my large collection of unique and valuable scientific samples. It hired a spy to covertly surveil me, using improper methods that it fully knew. It hired a psychiatrist to use my captured intimate information to make a personality profile of me without my consent or knowledge. It fired me in 2009 from my full and tenured professorship at the top of my career, under the chosen false pretext that I incorrectly assigned high grades to 23 advanced physics students in one course. And it spent over $1 million sponsoring a large defamation lawsuit against me, which deprives me of earning money for the rest of my life.

Those are just the larger things the professors' union and I have been able to find out so far. I discovered the fate of my sample collections only recently in 2017, and then only recently was I finally able to recover over 100 boxes of my personal belongings from my office.

Read the letter itself and you will see. President Jacques Fremont, has not answered me yet.

Here is the text of my letter:

Re:  Ending the University of Ottawa’s unrelenting punishment of me
Dear President Frémont,

I was a professor in the department of physics at the University of Ottawa from 1987 until 2009.  I occupied the highest academic rank of Full Professor beginning in 1997.

I am recognized as an expert in my profession and have taught thousands of students.  I am a much appreciated teacher and research supervisor and I have published over 100 articles in leading journals in several areas of science (my present h-index score is 35).

I taught the Senate-approved course “Science in Society”, which I created following campus-wide student demand, in the largest auditorium on campus.  It was informally known as the activism course.

I was a critic of the university and I defended students against what I saw as institutional discrimination and racism.  In so doing, I used Malcolm X’s political term, “house negro”.  I did this in the context of a struggle for justice and in good faith, as attested to by the attached letters to you from community activists: Hazel Gashoka, Jean-Marie Vianney, and Cynthia McKinney.

The university dismissed me in 2009 using the pretext of my having assigned high grades to all 23 students in one advanced physics course, and then spent over $1 million sponsoring a large defamation lawsuit against me.

You have emptied out my bank account by court order, you have repeatedly threatened to take my family’s home, and you have asserted that you will continue to enforce recovery of your legal costs in excess of $1 million.  Therefore, I am not able to pursue my work as a teacher and scholar, since you would take every penny.

You destroyed my career and took everything I have. You have done enough. I’m hoping that your sense of decency will cause you to grant this request for relief.

The university’s punishment of me has been relentless, including the following.

Recently this year, as I sought to continue my scientific work, the university said that it destroyed my large and unique collection of scientific samples — when it locked me and my students out of our laboratory while I was still a full professor.

Many of the samples are irreplaceable and priceless, and I considered myself their custodian on behalf the scientific community.  The Association of Professors of the University of Ottawa (APUO) has assumed my $1.25 million grievance concerning this destruction.

The destroyed scientific samples included:
(a)    The only large non-oxidized piece of the Santa Catharina meteorite, in which the meteoritic metallic phase “antitaenite” was discovered.
(b)    The only large sample of remnants of the K/T boundary meteorite that may have killed the dinosaurs, collected in the field by a leading-expert collaborator, and kept in a sealed atmosphere.
(c)    Unique suites of synthetic layer silicate compounds, which led to several fundamental discoveries.
(d)    Suites of loess-paleosol samples (ancient soils) from two sites, in China and Eastern Europe.
(e)    Preserved samples of sediments from 100 lakes in Canada, from the largest study of its kind in the boreal forest.
(f)    Several suites of samples of synthetic compounds and alloys having unique electronic, magnetic, and magneto-volume properties.

For years the university threatened to destroy my personal papers, too.  Since 2008, the university refused to give me access to my belongings from my personal office in the physics building.  The materials were research notes, original course content, unpublished book manuscripts, two decades of correspondence, specialized books, and much more.  Only recently, thanks to your direct intervention, was I able to recover the more than 200 cubic feet of paper materials.

The university hired a student spy (Maureen Robinson) to covertly surveil me for more than one year while I was a professor.  Her actions were condoned by her immediate supervisors (the dean and the legal counsel of the university) and included using a false cyber identity (“Nathalie Page”) and falsely representing herself personally to third parties.  The student spy provided weekly reports about me to the university.  Her role was described by an Ontario appellate-court judge in his motion ruling in the following terms:

MAUREEN ROBINSON
[15] The circumstances of Maureen Robinson's involvement in this entire matter is troubling at best.  Throughout the relevant portion of the Award by Arbitrator Foisy, Ms.  Robinson's written notes were referred to [as] "the report on Professor Rancourt's address prepared by a University of Ottawa student".

[16] Pursuant to the Udell Affidavit, and based on evidence from the hearing, the student being Maureen Robinson was the editor of the student newspaper who had been hired by the University in what the University described as in a clerical capacity to assist Professor Rancourt in his office, without his input on her hiring.

[17] Either in consultation with her employer, the University, or on her own, she monitored the activities of Professor Rancourt both on and off campus and reported her finding back to the University.  In an email to Dean Lalonde, she admitted to having a "personal grudge" against Professor Rancourt and went so far as to liken her monitoring of Professor Rancourt as "posing as a young girl to catch a pedophile".  Ms.  Robinson was not called as a witness at the hearing and, the parties agreed that her "report" would be considered as an "aide memoire" only.

[18] The University referred to the “report” thereafter as a transcript which such description was objected to by the APUO.  Similarly, Arbitrator Foisy made certain findings which appear to be based solely on the report which was not evidence.  [Underlined sub-title in original]

In 2008, the university’s VP-Governance coordinated a capture of my intimate childhood information for use by a hired psychiatrist to make a written “psychiatric opinion” of me without my consent or knowledge.

The university followed this by not informing me of its actions, and by vigorously opposing my access to the psychiatric report until the final hour of an appeal in litigation for access in 2017.


You have a reputation as an advocate of human rights, and you recently took charge of the university’s case with me.

I write to you now to ask for a fair resolution that will allow me to resume my work as an educator and scientist, and to earn my living in this way. As it stands, the university would seize all of my income, just as it recently seized my bank account. The interest alone that you seek is more than $30,000.00 per year.

Please assure me that you will instruct the university lawyers that a settlement is needed that will allow me to resume my career.

Encl.:  Letters from Hazel Gashoka, Jean-Marie Vianney, and Cynthia McKinney [three attachments in the original] [Direct link to PDF of the original]

Posted by Denis Rancourt at 7:14 AM