To: Joseph Ratzinger, aka “The Pope” and Pontiff of the Roman Catholic Church 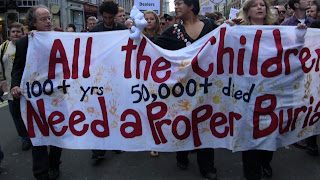 The International Tribunal into Crimes of Church and State

Cause No. ITCCS – 001 – 2011 UK, Docket 001 A
PUBLIC SUMMONS
To: Joseph Ratzinger, aka “The Pope” and Pontiff of the Roman Catholic Church
BE ADVISED that you have been listed as a primary witness in an adjudication of a matter before this Court, which is a Tribunal of International and Indigenous Judges. Your presence is hereby requested on Monday, April 4, 2011 at 10:00 am, at a location to be disclosed, in the City of London, England.

Said Tribunal is convened pursuant to international Law, indigenous tribal Law, the Rule of Natural Law and the Law of Nations. Your presence is required to participate in the examination of issues and questions regarding the following matters and charges:

1. Your responsibility and liability as head of the Roman Catholic Church for the crimes of genocide, murder, warfare, forced removal from traditional lands, slave labour, institutionalized racism, theft of resources, child trafficking and pedophilia, and other crimes against indigenous peoples and children, arising from the Indian Residential School system in Canada established and maintained by Roman Catholic Church and the government of Canada.

2. Your failure to reply or respond to a public Letter of Demand issued to you from the Friends and Relatives of the Disappeared dated February 4, 2008, asking that you identify the burial sites and cause of death of children who died in Indian Residential Schools in Canada established and run by your church.

You may desire to consult with your attorney in regards to this matter, or have an advocate attend the hearings with you. You may submit written documents and materials, but be advised that they do not carry the same weight, or can substitute for or replace, your personal testimony.

BE ADVISED that any failure by you to respond to this PUBLIC SUMMONS, or failure to attend this Tribunal, can be interpreted to mean that you do not dispute the charges made against you laid forth in this document and by witnesses and other material, and may result in a verdict against you made in absentia.

Due to the Nation to Nation status of this issue, involving the original Nations of the North American continent as holders of Allodial Title, and its concern with matters concerning internationally recognized Crimes against Humanity, this Tribunal and its findings will be monitored by human rights specialists and representatives of governments, International agencies, indigenous Nations and the public media.

This Tribunal will be open to the public and the media. Its officers will submit its findings in the form of a final comprehensive report to the United Nations High Commissioner for Human Rights, the International Criminal Court, and other bodies.

Duly Signed and Delivered this 18th Day of September, in the year 2010, in the City of London.

(signed in the original)