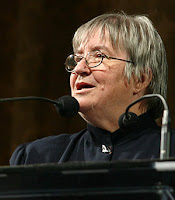 (part of an email received from a supporter of Lynne Stewart)
In 1995, Lynne Stewart was appointed by a federal court to represent the blind Egyptian cleric Sheikh Omar Abdel Rahman, who was accused of conspiring to blow up New York landmarks. She became co-counsel  with former Attorney General Ramsey Clark and renowned civil liberties attorney Abdeen Jabaar.

Despite Lynne Stewart having marshaled evidence demonstrating the innocence of her client, and pointing indisputably to the hand of the government in the plots attributed to her client, Sheikh Omar Abdel Rahman was convicted and sentenced to life imprisonment plus 65 years!

Special Administrative Measures (SAMS) were imposed, violating first, fifth and sixth amendment rights of defendants and attorneys alike.
These measures placed severe restrictions on any communication of Sheikh Omar Abdel Rahman communication with the outside world.

On April 9, 2002, Attorney General Ashcroft made an unprecedented appearance on the Late Night Show of David Letterman, a nationally viewed entertainment talk-show, to announce that the Justice Department was prosecutIng Lynne Stewart for providing "material aid to a terrorist organization."
This "material aid" was her own person and her function as defense attorney. The "material aid" consisted of a Press Release conveying the views of the Sheikh and given to a Reuter's correspondent - an action protected by the first amendment and the free speech rights of Sheikh Omar Abdel Rahman and Lynne Stewart alike.

The Justice Department of George Bush and of Barack Obama prosecuted Lynne Stewart and demanded 30 years in prison. This attack upon due process and basic democratic rights was aimed at every attorney in the United States. The intent was and remains to destroy democratic rights and protections that date to Magna Carta.

Lynne Stewart was railroaded to prison in a show trial evocative of the era of Joseph Stalin. Broad public protest caused presiding Judge John Koetl to declare Lynne Stewart  "an asset to the nation" while sentencing her to 28 months in federal prison.
Pressed by the Justice Department, the Appellate Court, breaking precedent, directed Judge Koetl to increase her sentence drastically, to revoke her bail and remand her to prison despite the fact that Lynne Stewart had the right to appeal her conviction to the Supreme Court.
Judge Koetl, yielding to this immense pressure, increased his original 28 month sentence to ten years. This has become, effectively, a death sentence for Lynne Stewart. Urgent surgery was delayed 18 months by the prison authorities. Her breast cancer, in remission before imprisonment, metastasized and spread to her lymph nodes, bones and lungs.
... We must mobilize world opinion to stop the judicial and political murder of Lynne Stewart ...

The campaign to save the life of Lynne Stewart is a first line of defense against a ruling class rapidly destroying the rights obtained through generations of struggle as a ruthless system prepares to subjugate us all.
WE CALL UPON ALL TO SIGN THE PETITION NOW TO SAVE LYNNE STEWART
Click on this url link to sign the petition:
http://www.change.org/petitions/petition-to-free-lynne-stewart-save-her-life-release-her-now-2
Posted by Denis Rancourt at 6:05 AM

Wow. Another petition. Another life at stake. Paper and signatures may save this woman's life, but the next time there may not be any use for them. The next time we might not even know someone is about to die for our basic rights in a war that most of us don't even know is happening. Guess we better turn down the TV a sec, huh?

It better be soon that we realize we are going to need more than pens and paper to fix these problems.

You need to correct the spelling in your headline..."viscious" is not a word! I think you really want "Vicious"...looks bad on a blog named "Activist Teacher"...Lynne's mom was an English Teacher, she would be on your case if she were still with us!