"Call the Zionists what they are: Nazi criminals" -- Auschwitz survivor 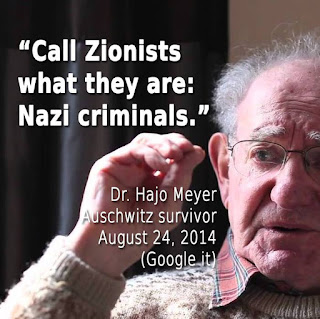 Auschwitz survivor, Dutch theoretical physicist and human rights activist HAJO MEYER (died at 90 in 2014, both his parents were killed at Auschwitz):

<< “If we want to stay really human beings, we must get up and call the Zionists what they are: Nazi criminals,” Meyer said. The hate of the Jews by the Germans “was less deeply rooted than the hate of the Palestinians by the Israeli Jews,” he observed. “The brainwashing of the Jewish Israeli populations is going on for over sixty years. They cannot see a Palestinian as a human being.”

While discussing Europe’s response to Israel’s policies, Hajo said that Europe should respond with “a much more large scale boycott of Israel” than a ban on settlement products. If we Europeans pretend to hold high the flag of humanity with what is happening in Gaza, Israel should be outcasted by us.”

I asked him if he had a message for the Palestinians, Israelis or human rights activists.

“My message for the Palestinians is that they should not give up their fight,” he replied. “If they give up, they might lose their self-esteem with the ongoing humiliations by the Israeli Nazis. Fight with human means. It is justified to show to the Israeli Zionists that you are a force to reckon with. Fight with stones, with weapons. Yes, also with weapons. If you don’t fight, you lose your self-esteem and will not be respected by the Israelis.”

“If we Western democratic societies don’t support the Palestinians in their fight, we must feel ashamed if the Palestinians are annihilated. The US and the European Union must show their teeth,” he added. >> --LINK


And this from the heavily-Israel-lobby-patrolled Wikipedia:

<< Meyer became politically active, including as director of A Different Jewish Voice. He wrote Het einde van het Jodendom (The End of Judaism) in 2003, which accuses Israel of abusing the Holocaust to justify crimes against the Palestinians. He was a member of the International Jewish Anti-Zionist Network. He participated in the 2011 "Never Again – For Anyone" tour. He claimed Zionism predates fascism, that Zionists and fascists had a history of cooperation (Nazi/Zionist cooperation was the subject of 51 Documents: Zionist Collaboration with the Nazis, which was collected and edited by Lenni Brenner), charging, among other things, that Israel wants to foment anti-Semitism in the world to encourage more Jews to migrate to Israel.[4]

Meyer spoke in favor of Boycott, Divestment and Sanctions against Israel.[5] Meyer was a member of the Dutch GreenLeft. >>


And directly from interview:

<< Now the world is silent while the Jews, or- the Israelis- harass, humiliate and steal away land from the Palestinians. And the world is silent, and I want to awake the world, because any criticism on the policies of Israel, is hampered and made impossible by a terrible trick and crime of Israeli propaganda, that any criticism on the politics of Israel comes out and is induced by anti-Semitic feelings. >> --LINK