RACISM AND ISRAEL AND YEMEN 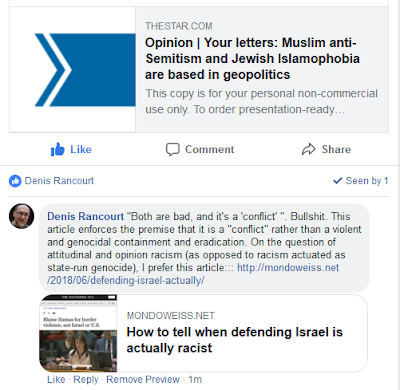 
RACISM. The Western middle-class ethos has been infected by a disproportionate taboo-like hyper-aversion to attitudinal and opinion racism.

This is a socially engineered and recent pathology that is not checked by humour and satire. People are now routinely prosecuted and jailed for victimless "hate speech" that is inferred to signal blasphemous beliefs and attitudes.

One consequence of the said pathology is that, as a result of the obsession with thought racism, it is difficult to discerned physical racism operationally enabled by states.

The more thought racism is an obscene crime, the less difference there is with racism actuated as state-run predation, genocide or war, which are the Western state’s main expenditures.


You can't get Canadians upset about the on-going mass genocidal war in Yemen. On the contrary, average liberal Canadians in-effect agree to sell the Saudis weapons to help advance the massacre and cheer on the sanctions and blockade. But if a baker refuses to make a cake for a gay wedding all hell breaks loose.

The public is content to accept state-run physical racism if it is masked by vigorous demonstrations of concern for attitudinal and opinion racism.

For example, Canadian aboriginals can continue to be poisoned on toxic holding reserves and continue to have their land rights violates if "we" give them "respect" and "value" their traditional knowledge and languages, and suitably freak out at social media examples of overt personal expression racism or related interpersonal incidents.

Similarly, as a result of the said pathology, a charge of anti-Semitism is a powerful censoring bludgeon to silence objections to Israel's violent and genocidal 70-year containment and eradication campaign.

The defenders of the “Words that Wound” industry of manufactured outrage and criminalization against attitudinal and opinion racism make a steep slippery slope argument [a]. They argue that individual expression is the tail that wags the state-sponsored racism dog. I argue the opposite, that free expression checks state violence and abuse, and produces meaningful and robust cultural development. Instead, we have silenced the comics, militarized the media, and jailed the “hate speakers” that are the most triggering catalysts for intellectual and moral development.

Instead of discerning thought and expression racism of individuals in our own society from physical-violence racism of our state, the pathology is so advanced that we are reduced to pointing out inconsistencies or bias in outrage.

For example, Ivan Kalmar, anthropology professor, University of Toronto, argues that both anti-Semitism and Islamophobia are appalling and that “both are fed by the Israel/Palestine conflict” [1]. In this way, the powerful state of Israel’s violent and genocidal containment and eradication of the native population is not an egregious long-term mass violation of the Geneva Conventions regulating military occupation but rather is simply part of a “conflict” that produces “appalling” individual racist attitudes and demonstrations in both a priori legitimate sides; because after all, it is those racist demonstrations at home that concern us.

Steven Salaita, on the other hand, has brilliantly exposed the narrative (“hasbara” or spin) pushed by Israel to be fundamental state-sponsored racism, underpinned by true conviction of race superiority [2]. But he has not done it in a way that expressly challenges the “Words that Wound” pathology, as he did in the “legitimizing anti-Semitism” tweet that made him famous.


Denis G. Rancourt is a former tenured full professor of physics at the University of Ottawa, Canada. He is a researcher for the Ontario Civil Liberties Association. He has published more than 100 articles in leading scientific journals, on physics and environmental science. He is a social theorist and the author of the book Hierarchy and Free Expression in the Fight Against Racism.
Posted by Denis Rancourt at 8:37 AM