Criticism of the Dalai Lama – so positive and forgiving that it hurts! 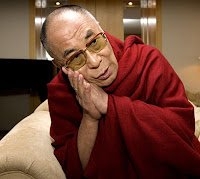 This blog features several essays that attempt to explain the destructive nature of the “positive” and “progressive” and “educational” movements which are populated by the majority of First World “activists” and “aware” citizens:

But a poem can be worth a thousand essays…:


The Ocean of Wisdom *

We resist from our slums
You resist from the podium
Beloved of Hollywood,
Ocean of Wisdom:
Can liberated celebrities
bring freedom to a people?

Go!
Leave my aching land alone!
To Lhasa,
I support your right of return

* Welcoming the Dalai Lama to the Holy Land. The Dalai Lama is planned to visit Israel in the middle of February to participate in the launch of ceremonies marking 100 years since David Ben Gurion immigrated to Israel.
** We thank poet and activist Ehab Lotayef for allowing the use of his poem.
Posted by Denis Rancourt at 5:11 PM

i have done a lot of reading into this 'awakened' culture that east asian philosophy within their poems likes to promote. however, i do find a lot of areas problematic. for example, their overemphasis to accept the world as already perfect and not being changed in order to gain 'peace'. i would rather not gain any peace if that means turning a blind eye to opression and injustices just so i can gain some "peace"....