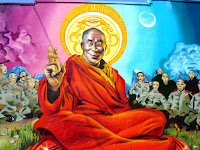 (…with concluding remarks by Derek Jensen)

According to THIS ESSAY by leading US left intellectual and historian Michael Parenti, the West has made the Dalai Lama as both the figurehead of the “romanticized Shangri La” myth of pre-communist-invasion Tibet and a popular legitimizing agent of First World colonialism.

According to Parenti’s analysis old Tibet “was a retrograde repressive theocracy of extreme privilege and poverty” with a feudal economy based on legalized slavery and enforced serfdom.

Parenti also describes documents showing the CIA’s direct support for the Dalai Lama and points out the Dalai Lama’s stated pro-colonization positions on such topics as the wealth-poverty divide, the illegal Iraq war, the US intervention in Yugoslavia, and the invasion of Afghanistan.

It turns out that on questions of specific US military interventions the Dalai Lama is no pacifist. This in no way diminishes his leadership status among his “principled pacifist” followers in the West. The CIA expects good behaviour from the Dalai Lama and First World “pacifists” need their guilt-alleviation fix. The two go hand in hand.

We end with these spirited words by author and activist Derek Jensen about the absurdity of the pacifist ideology of First World devotees:

RELATED LINKS
Criticism of the Dalai Lama: So positive it hurts
How CIA helped Dalai Lama to end up in exile
"Democratic Imperialism": Tibet, China, and the National Endowment for Democracy
Resolving the Israel-Palestine Conflict: What we can learn from Gandhi
A critical look at Mahatma Ghandi (audio)
On the need to embrace hatred
Posted by Denis Rancourt at 1:28 PM

Featured on SleptOn Magazine - click this link to visit SleptOn

An article from Libération and an interview by Marianne about the nazi acquaintances of this theocracy:

Did you know that the XIIIth Dalai Lama translated Mein Kampf to tibetan?

Sorry for the source (info-sectes)... I really have nothing to do with these 'true believers'.