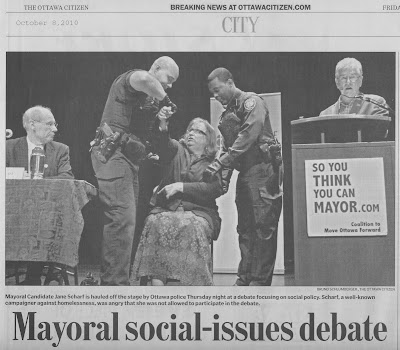 Well known poverty rights activist and returning mayoral candidate Jane Scharf was not allowed and was forcibly hauled off. None of the mayoral candidates present, defenders of democracy that they are, protested the police violation that occurred in public.

The media faithfully reported that Jane Scharf, the most qualified candidate on poverty issues, had attempted to "hijack the debate."

The level of corporate fascism is so advanced that most of us don't even see a problem here.

See all the "This is Canada" posts
Posted by Denis Rancourt at 7:00 PM