On the Justification for Profit and Interest 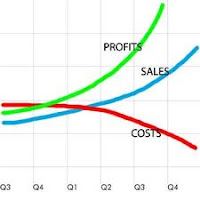 Proposal for an economic theory of renewed capitalism

Profit is where you extract more than you put in; more than your work and more than the goods you put in. You get back your material investment, you pay yourself for all your work, and then you get profit on top of that [1].

["the difference between total revenue and ALL costs"]

Where does the profit come from?

Well it comes from others who get less for their work, pay more for what they need, and don’t get any profit.

Profit is a very clever invention.

And of course the borrower really needs the money to get himself or herself started in some business to earn a living or just to get out of the cold into a home.

But with interest it’s even more perverse than that. You see bankers have invented something called fractional reserve banking. This means that bankers can lend money that they don’t even have and then collect both a real capital and the imposed interest from the borrowers.

I shit you not.

Bankers lend out ten or more times more money than they actually have while all those borrowers kill themselves paying back money that never was. Indeed, that is how money is made in our debt-based monetary system. Bankers write a number on your bank account book and then you work your ass off to make that money from real work to give it to the banks.

Ever wonder how some people can be so very rich…?

Now that would only be fair distribution if the bank was publicly owned and democratically controlled and interest rates were limited to the costs of lending. But guess what? Virtually all banks, including the so called US “Federal Reserve”, are privately owned.

No shit. And every time a politician has tried to nationalize the banks or avoid the private banks or create and use alternative banks he/she has been mysteriously killed, from Abraham Lincoln to Saddam Hussein, or driven from power by mysteriously well funded opponents.

OK I digress. The simple point is that profit is a scam in which the profiter, who is always a profiteer, extracts more than he/she puts in at the expense of others who either have little choice or are simply duped.

My point is that profit, by definition, is a scam. The only way it can be justified is to take the view that the profiter has some natural or God-given right to profit.

But now the profiters have hired themselves service intellectuals called economists who have the job of making the profiters appear both noble and needed. Indeed, if we believed economists, then all of progress and development would be due to the cleverness and motivation of profiters.

So the way the economists have worked this out is that we need the profiters to re-invest their (mostly non-existent, see above) spoils in such a way as to extract as much more capital and profit as possible so that we can all benefit from this extraction out of the pockets of everyone and into the pockets of the profiters.

No shit. They actually say this.

Oh and they have another great smoke and mirror thing called “supply and demand”. It’s like this fiction where price is set by how hard it is to make something and how much folks want the thing. And this magic controls profit so it never gets “exploitative”.

Ya, and I have this bridge I want to sell you.

Here’s a reality check: The profiters set the price and manipulate both supply and demand to extract maximum profit. Oh shit, a new economic theory. Oh, oh, and the profiters conspire to cause all-out destruction (called war and economic predation) so they can profit both from making the destruction and from forcing exploitative reconstruction entirely on their terms.

Would you pay exorbitant interest for a chance to live after everything has been destroyed?

Oh, oh, and the profiters buy out the politicians and ruling elites to take on over-the-top public debts financed into the next century. Why not? Do we have a new economic theory yet?

OK so you get the equation:

Hello. Everyone in human history has always understood this. Interest on loans, in particular, was called usury and was against Christian religious principles. Riba is the corresponding Arabic term. And ribbit is the Hebrew term. It was unambiguously immoral and forbidden.

When did robbing the oppressed become the foundational economic model for the planet?

It shouldn’t take a rocket scientist or a Harvard economist to understand the violation of natural justice here. In fact, it takes a lot of hard working economists to not understand it.

Just remember the equation and rebel.
Posted by Denis Rancourt at 7:59 PM

Have a look at the following sources:

This is an official publication of the Federal Reserve Bank of Chicago. It describes in great detail how fractional reserve banking works.

- The video "Money As Debt". It's available on youtube.

- The video "The Money Masters". It's available on youtube.

- The video "Zeitgeist Addendum". It's on youtube and freely available from its homepage: www.zeitgeistmovie.com/.

Excellent post. My eight year old son is asking the right questions....before they beat the inquisition out of him. He asks, "Dad, why do we have to pay to live?" Why, indeed. It's the most important question of all, and one I can't answer without filing him with despair, but I also don't want to squash his inquisition. I would like his to find the answer, but that's a tall order because there are duplicitous answers to that question supplied by the Plutocratic Ministers of Education.

I don't understand why an honest and realistic answer would cause despair in your son. This assumes an unrealistic starting point.

Quite the contrary, it would encourage his sense of research and independent thinking and these qualities are good defenses against despair.

The sooner he learns that human affairs are corrupt but that he has influence and can rebel, the better. And the healthier he will be.

But don't "teach it" in the sense of delivery of truth. Just open the door to other views and support his exploration and self-reliance.

Must profit be abolished professor? Capitalism seems to be a thermodynamic heat engine which believes it can get more out of "itself" than is put in. Should a system built around the opposite be put in place? Where everyone "works" at a "loss" with the "gains" being collectively stored and then redistributed?