THIS IN NOT A TRICK QUESTION 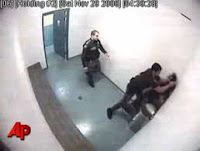 On police brutality in the Claude Haridge case, Ottawa, Canada

Which of the following two violations is the most despicable and the most threatening to democracy?

(a) An anti-war protester throws a paint-filled rubber balloon at a bus exiting a major military weapons show in Canada's capital city, thereby splattering some paint on at least one police officer.

(b) Following arrest, the same protester is gratuitously verbally and physically assaulted in a holding cell by an attending police officer while in handcuffs and while another officer looks on and both officers then lie in kourt that there was no assault.

If you answered (a), then you agree with Justice Ann Alder who read a ruling today, Friday January 7, 2011, in the Claude Haridge case, superior kourt of Ontario, Ottawa, Canada.

In plain language, the Justice ruled that assault by police officers is OK.

Alder concluded that there had been a significant physical assault and inappropriate verbal intimidation perpetrated by one officer and that two officers had lied to the kourt to cover this up. However, in her ruling Alder spent much time advancing tenuous evidence that Mr. Haridge had exaggerated the gravity of the physical assault against him and she discredited the expert medical testimony based on an ancillary point whereas she did not reprimand police or make any criticism of detention procedures.

No charges of assault or perjury where handed down to the police officers. Imagine if the same gratuitous violence, proven in kourt to the same "balance of probability" standard, had been against a police officer...

In addition, Alder stated that the charge of throwing the paint balloon was of concern enough to "society" that the case should proceed to trial. Our guess is that the judge does not mean that it is of interest for society to question Canada's militarism and a citizen's moral duty to oppose this militarism.

Somehow, we don't think the latter will be a consideration entertained by the kourt - although some misguided observer might propose that this should be the central issue of the case (ah, yes).

"This case is just another example of what has been going on in this country. Throughout amerika's history, people have been imprisoned because of their beliefs and charged with criminal acts in order to justify that imprisonment."
-- Assata Shakur, self-defendant, u.s. district kourt, July 19, 1973

Do you feel you are living in a nightmare yet?
Have you noticed the rising temperature of the aquarium water?

Thank you for posting this, Denis. Disturbing, very disturbing.