Assata: An Autobiography by Assata Shakur 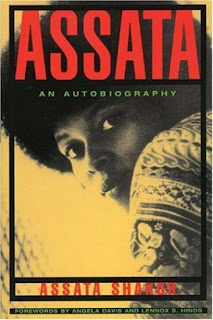 This is the most beautiful and rewarding book I have read in a long time [1].

As an old white First World male, there are not a lot of books that emotionally stir me to tears. This is a rare gem for me in that regard.

The book reaches into growing up black, self-discovery through bold exploration, and dignity-preserving rebellion that should not be driven from any soul.

The experiences are real and positioned in history with a candid view of the outside turmoil and its impact on self, family, and the black nation.

The critics that bash the book as Shakur's political ranting are out to lunch. The book is mostly a personal and historic voyage recounted with extreme sensitivity and flair. It is not a political essay or party propaganda by any stretch!

I had a few criticisms regarding Shakur's recommendations for the struggle.

Shakur's pedagogy with young children is inspired but her view of the importance of formal education in black struggle, in my opinion, is misguided. She was not aware of the work of Paulo Freire which was first published in English in 1970. Although she knew about theology of liberation, Shakur did not have theoretical knowledge about the central role of the praxis of liberation in learning [2]. This despite the fact that her own learning was predominantly achieved by praxis.

As a result, Shakur would have designed formal college-style education for Black Panther cadres. This suggests that her development was partially polluted by institutional college education.

Similarly, Shakur appears to not have been aware of the anarchist critiques of socialism and communism. Her suggestion to moderate the rebellion of independent Black Panther operatives driven underground in view of its perception by the mainstream struggle is a carbon copy of present activist discussions around "violence" and, in my opinion, is counterproductive [3].

This is a minor point in the book but whereas Shakur correctly taps into her own rebellion and life force throughout this period in her life she fails to realize that tapping into such individual rebellion is the life-source of emancipatory revolution [3]; rather than depending only on organizational discipline coupled with ideological education.

References
[1] "Assata: An Autobiography" by Assata Shakur
[2] "Pedagogy of the Oppressed" by Paulo Freire
[3] "Symbiosis of anarchy and hierarchy" by Denis G. Rancourt
Posted by Denis Rancourt at 10:06 AM

Interesting. Have you read Malcom X's autobiography?
Here's the other book I recommended: http://www.amazon.ca/Shall-Not-Hate-Doctors-Journey/dp/0307358887

Assata does not advocate a formal college style education for black revolutionaries of her time. She advocates for thinking and dialogue among the people about what happens after the armed revolution. A revolution that leaves leaders as matyrs, that leaves parents in jails, that destroys the fabric of community is not a forward thinking revolution. The Black community today is still recovering from this lack of forethought, planning & dialogue (which Friere speaks to). Being a byproduct of that revolution I carry the same sentiments as both Assata & Friere: a political education will truly liberate the masses of oppressed people in the third world state of amerika & countries like it.

@Jamii Tata: Thank you for your comment. My opinion is based solely on reading the autobiography. I agree that FrEire describes the personal psychology of revolution that is needed in order to not recreate the oppression, but I do not agree that Freire promotes/believes that "a political education will truly liberate the masses of oppressed people in the third world state of amerika & countries like it". On the contrary, Freire's approach is praxis in fighting one's own oppression. But I may be wrong? Could you provide a quote from Freire that best supports your interpretation? Also, I have written a book that explores these questions: Hierarchy and Free Expression in the Fight Against Racism

You might add the label (i.e. tag) "book review" for this article, and perhaps some other tags as well.