Technology does not come from geniuses 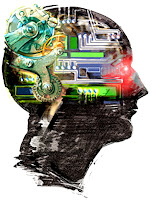 Technologically advanced societies nonetheless preserve animality in that habitat and resource competition and dominance hierarchies remain intact and are the main determinants of social order.

The high degree of advancement of the technology is such that no individual in the society can alone reproduce or repair, not to mention understand, most technological devices.

This has the psychological impact to infantilize the individual in that the individual must accept technology as a given, produced and supplied by some meta-parent. The individual does not participate in the creation of his/her environment but instead only is allowed to inhabit the given technological environment, via compliance with the established order or dominance hierarchy.

It further infantilizes the individual by communicating that since the surrounding technology cannot be understood or created by the individual, then the parent-like others who create this technology must possess high intelligence and qualitatively superior knowledge.

Technology intimidates us into concluding that all or at least top-level engineers, doctors and scientists must individually be highly knowledgeable and highly intelligent.

This is true to the point where even when we personally know top-ranking engineers, doctors and scientists and know them to be normally moronic in their interactions with us we nonetheless assume that they must be brilliant in their work.

The fallacy stems from not recognizing that, contrary to Western scientific progress mythology, technology is a living and evolving macro-structure that does not require exceptional individual intelligence. Instead, technology has developed by common trial, error and adaptation, for over one hundred thousand years. It is the product of an evolution; a unique evolution tied to all of its historical circumstances and geopolitical textures.

It is an evolution in the same sense as biological evolution as we understand it -- with accidents, mass extinctions, spontaneous mutations, competition for survival, rapid population growths in niche environments, and so on. Most biological mutations are dead ends -- most patents are useless certificates; species invasion can transform a regional ecology -- a new gizmo can make the practices of an entire production sector obsolete; unneeded features of animal physiology persist (appendix, goose bumps, etc.) -- unneeded technological practices and steps persist (most of medicine and nutrition [1], etc.); and so on.

Just as over four billion years of biological evolution has produced a biosphere so impressive that it infantilizes us to the point of believing in ghosts and concluding that their must be a god-creator or gods, the technophere is so impressive that it leads us to conclude that it must be the product of geniuses. Indeed, we venerate idolized scientists and inventors as gods in the human realm.

The truth is that technology is the product of centuries of tinkering, accidents, adjustments and applications -- with cross-culture fluxes and multiple drivers -- without any need for high-priests, only practitioners who conserve the recipes and perpetuate the methods.

The truth is nobody knows how that gadget works. But, collectively, we know how to make it and, collectively, we will "improve" it. Many experts can talk "brilliantly" about how that gadget works but these talkers will not play a significant role in "improving" the gadget or in producing the new revolutionary gadget. They mainly only produce and maintain the system's control mythology [2].

We need to stop believing that there are geniuses and an intelligent elite class among us and start thinking for ourselves. We have succeeded in a cultural understanding that politicians are dangerous and manipulated idiots. That was progress. We need to understand the same point about researchers, doctors and scientists; technology's talking heads.

Let's not trust experts to sell us anything, including lifestyle changes and light bulb changes, whatever.

[1] "On the sociology of medical meta-science: Exposing the Truth supports the Lie" by Denis G. Rancourt, 2011, and references therein.

[2] "On the False Science of a Fundamental Basis for Progress" by Denis G. Rancourt, 2011.

Other essays by Denis G. Rancourt
Denis G. Rancourt is a former tenured and full professor of physics at the University of Ottawa in Canada. He practiced several areas of science (including physics and environmental science) which were funded by a national agency and ran an internationally recognized laboratory. He has published over 100 articles in leading scientific journals and several social commentary essays. He developed popular activism courses and was an outspoken critic of the university administration and a defender of student and Palestinian rights. He was fired for his dissidence in 2009. His dismissal case is in court hearings that will extend into 2012.
Posted by Denis Rancourt at 1:39 PM

To the point as usual. The biggest blockage in facing that we are not "taken care of" by anyone nor anything is that it is frightening to accept that technology or institutions or corporate or governments do not exist to parent, can not parent and will not parent. This leaves that one has to be an adult, leaving for most either fear or anger. There is another state, a state where we find our humnanity. Problem is we have to go through fear and anger before.... shoooooottttt! Thanks for you being there Denis!

As an electrical engineer who has designed, circuit boards, the chips on those circuit boards, large control systems, mechanical structures and written programs from low level machine code to high level programs, I disagree with your statement that most people think understanding how things are build is beyond them. It only takes about six to ten years to gain the basic skill set to understanding of how to design and produce pretty much any consumer device you see on the store shelves. I think most people know this, otherwise engineers would make a lot more money than they do.

hi. yes. you are a techno-craftsman. Craftsmanship is the techno-developmental link between technology and humans.

"Understanding" as you use the word means knowing the practice of your trade/profession.

But your work takes most of what you use as a given. For example, the many integrated nano-components in an IC chip. Does anyone know really what the "electrons" are doing across these chemical and density and structural nano-gradients? As a physicist, I don't think so. We make them and test them but we don't knowingly "design" or "control" them...

We can't even predict the crystal structures of the solid elements or their correct lattice parameters if we impose the correct crystal structures, using all the relativistic quantum mechanics you can cram into a parallel computing facility, never mind actual nano-gradient devices... Hell, we can't even handle a two-electron ion or the kinetics of a simple two-molecule binding reaction. And on and on.

Denis, I am a long time music freak and have spent a good deal of time in studying, writing, and playing it, from a classically informed perspective.

It occurred to me that almost any skill fits well into your model of 'theory vs. practice,' music being a good example.

For instance, one can learn to play a music instrument and compose perfectly competent pieces without any serious grounding in the theoretical aspects of harmony and composition. However on another level, music is rarely practice in a theoretical sense at all, since most of what we call 'theory' is simply a study of historical practical uses – whereas theory would be the study of wavelengths and the human ear, etc.

I think throughout history one needs only look at the arts and sciences to see that quite advanced results were gleaned without any firm understanding of their theoretical basis – for instance gothic architecture, or Renaissance polyphony. Does anyone think the Egyptian pyramids were built with full knowledge of the mathematical principles behind them?

It really is a quite recent development that we've convinced the public at large to believe that one must acquire a massive background in theoretical study in order to be 'qualified' to offer up a worthy product, skill or idea. I think the rise of this attitude is concomitant with the rise of large university and other institutions of mass hierarchical subversion of human talent, like public schooling and the creation of a massive government class of professional bureaucrat pen twirlers.

After all weren't there 12 year old masters of astronomy in the middle ages? A large portion of what modernity has succeeded in accomplishing is to forestall human freedom and ingenuity while the highway robbery of tax and university accreditation has their pick at us.

In reality, practice always trumps theory because without practice, the use of the theory is null to begin with. At its apex, theory can help to improve practice but beyond that is a deleterious effort bent on forestalling progress.

I would also like to add that evolution of life itself is a quite good demonstration of practice over theory, in that it would be impossible to go about living if each person were to be expected to fully understand all of the complex 'accidental' systems which have accrued and culminated in his experience of living.

We certainly are on a common wavelength. The Fourier transforms of our thinkings have an overlapping peak.