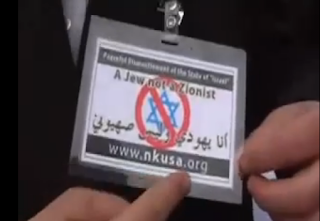 Surely the Israeli government would agree that the right of a nation state to exist is a question of international law.

Under international law, no other country has ever demanded or been granted that another nation state be forced to officially recognize the claimant nation’s “right to exist”, under the threat of military reprisal no less.

But since this is an original and unresolved question of international law and since Israel has forcefully put it on the table, it is relevant to examine whether Israel is following established principles of international law, such as the Geneva Conventions for example, or foreign country assassinations and kidnappings, or international waters commando attacks of civilian ships, etc.

These specific questions of international law are not complicated. The laws and international treaties are written in clear language, and Israel’s actions are also clear. Global civil society (Amnesty International, Human Rights Watch, Red Cross, etc.) and all independent international law experts that I have heard or read are unanimous in the answer. See HERE.

The absurd “right to exist” posturing of Israel deserves to be ridiculed.


Did Nazi Germany have a “right to exist”? Germany exists today and its criminal behaviour has been stopped. It has no nuclear weapons and its security arises from its respect for international law and for its neighbours. Its internal security arises from respecting human rights. I wish the same for Israel. The right of return is a human right.

No country has the right to extort a statement of “right to exist” from any other country.

Every country has a right to its opinions and official positions about the legal and historic legitimacies of other states. What matters are actions and crimes and these matter in proportion to their magnitudes – the numbers matter, not the rhetoric.

Persons have absolute rights not to be forcibly displaced, occupied, collectively punished by arbitrary sanctions, murdered, etc. – this includes Palestinians and Israelis, all persons. States are criminal states to the extent and to the degree that they violate persons’ rights – the numbers matter.


To compare home-built rocket attacks on desert land to military onslaughts on cities and national infrastructures is a grotesque charade to justify mass murder and collective punishment.

The numbers matter. The numbers result from a large power asymmetry and this asymmetry (in both power and suffering) is the FIRST reality of the illegal Palestinian occupation. A language that does not start with this reality is one which masks and condones state criminality.

Likewise, the religious fanaticism and racism of many Israelis does not matter. What matters are the physical crimes being committed (in the name of “security”) that must be stopped.

World powers and influential organizations and civil society need to become rhetoric and racism insensitive in order to clearly see and gauge the actual physical crimes and to stop them, as the surest way to security for all (and to reduce cultural racism).

Commentators, lobbyists and service intellectuals who emphasize the rhetoric and societal racism of the oppressed work for the oppressor. Let us not have a competition about which side is most racist. Criminal racism is not rhetoric or vehement emotional reaction or hate – it is killing brown people. Leave opinion racism alone. Stop criminal acts. Focus. The cart needs to be put back behind the horse.

Israel needs to be stopped, for the greater safety of the most people – including Israelis.

And the US and Canada need to be stopped in their support of Israel state crimes. The Israel lobby needs to be stopped for the same reasons, exposed and stopped, on campuses, in governments, everywhere.

RELATED POSTS:
Psycho-biological basis for image leverage and the case of Israel
On the need to embrace hatred
Rabbi Weiss criticizes Zionist occupation of Palestine (youTube)
.
[Photo: ID card of Rabbi Weiss, a Jew not a Zionist.]
Posted by Denis Rancourt at 5:24 PM

Thank you Denis for an incisive article. We are in partial agreement regarding Israel, but my position is more "extreme" than yours.
The entire project to take the land of Palestine for a Jewish state was illegitimate from the start. This project is at the core of Zionism. Being “nice” to the Palestinians, as I’m certain many good and decent (but misguided) Jewish people favor, simply is not a cure for the cancer of conquest. The same for all conquests — of the Americas by Europeans and so on. The northern European/American project to retake the Ottoman Empire needs to be scrapped, completely given up. Jewish would-be conquerors of Palestine should be forced to leave and live elsewhere. Conquest is ALWAYS wrong, immoral, unethical and must be rejected. The British have been a leading curse of humanity, whose criminal history leaves a terrible legacy. Our task ought to be to clean it up as soon as possible. And of course the other European powers should leave Africa, probably the most despoiled population group in the world. What world-class monsters we so-called Whites have been, imposing “our” anti-civilization on the world.
I can be contacted at
george(dot)salzman(at)umb(dot)edu
My website is at
http://site.www.umb.edu/faculty/salzman_g/s/00.htm

I'm reminded of the for-and-against articles that came out when Libby Davies rightly identified the year the occupation began. I felt confused when reading as I don't have a deep understanding of the matter. So, thank you for this clear piece that addresses the the "right to exist" debate as the non-issue it is.

When exactly did the Children of Israel [12 tribes] turn into being NONHEBREW - NONSEMITIC - NONJUDAHITE - Ashekenazim converts to Talmudic Judaism s0-called "Jews" ? The Khazar converts have no righteous LAWFUL claim to even one square inch in Palestine. Which sorta BEGS the Question...SEE DEUTERONOMY 32.[http://disc.yourwebapps.com/discussion.cgi?disc=149495;article=131027;] Each journey begins with one small step...in the right direction.

Israel claims the right to exist because jews were God's chosen people, if we believe the holy bible. The problem with this is that abundant evidence proves the bible to be false. See whatisknown.com.
When we attempt to deal with law, the most important thing to remember is that a "person" is a fictional entity. A man is not a person. So the "human person" used by the UN in the declaration of human rights requires more clarification.
If the UN intends by "human person" the physical body of a man or of a woman, this should be stated more clearly.
Once this is stated, it will become obvious that the references in the bible to "God accepts no man's person" in Galatians 2:6 opposes the Christian faith in the resurrection of the physical body.
In several parts of the holy bible we read that God has no respect for "persons".
Since the bible states that the "person" belongs to the man and the UN seems to agree with this, it seems that all of the statutes created by governments violate the human rights of a man. In fact, the "person" that is subject to statutes is also created by governments and is a fictional entity, as is the government itself.
We just need to take a step back and correct this blunder (or deception) then move forward into a future where all men and women are equal. The men and women who live in Israel have the right to exist in peace and harmony with their fellow humans, but the state that kills humans and destroys property should be removed.

The only 'crime' the Nazis commited was to fight NWO Zionism.

The Holocaust is a NWO hoax. Up to this day there exist no evidence of any killing by gas in the concentration camps.

For murderallegations like that the accuser need to prove that there is a murdervictim (not simply telling they have gone up in smoke), they have to prove the murderweapon (the gaschambers have long been proven by chemical analyses of the plaster compared to the SS office to not be any different then other buildings. No Gas residue in gaschambers is pretty much prove they have never been used as such), third they have to prove the intention. For that the Zionist mafia came up with the Wannseeconference fake papers. But even read the fake papers: There is no mentioning of killing anybody.

To slander germans continously when you finally need them in your fight against the Zionist NWO is just stupid. Study National socialism as a recepy how to be not NWO and how to create a modern social state with a big success.

You are just partly brainwashed by Zionism.

They are no longer the chosen people of God because of their rejection to the one true Messiah, God made man, Jesus Christ.

If I were to bow down for the arguments sake and accept what biblical scribes say about the jewish right of return, it requires certain of their own prophecies to be fulfilled before that return. One was as worded, '6 million jews killed as if they were burned in an oven', so "gas chambers" was to fit that block mode of death and the number. The facts are the numbers of dead jews fall far short of the 6 million value, and the actual methods of death are scattered among all other forms during war time, starvation to bullet, so point two the method does not fit prophecy. That is just one of the many prophecies they have written before some god chosen return happens. Seems demons occupy the area at the moment if any "truth" to scripture is there.

As the article points out, any other international legal justifications are also far short of valid. The contracts they claim for the lands, they have violated every human decency clause within it since day one, also invalidating the act if "contractual".

Then there is the cold hard fact, the U.N. expects all other nations to embrace 'different peoples' with in their borders. Why the special treatment for habitual liars?

Sorry, but no matter what kind of govt. they set up, Jews have a historical right to Jerusalem and environs that no other nations or combination of nations can legitimately take away. In contrast, Arabs have never had a "nation of Palestine", and thus they are the ones who have no rights to Israel. Study Jerusalem's history accurate and free with the Historyscoper and see for yourself at http://historyscoper.com/tlwjerusalem.html

quote from The Holocaust Industry by Norman G. Finkelstein of the City University of New York, published by Verso in the year 2000: