Corroborated again at G20-Toronto:
In social activism by far the greatest threat of physical violence against persons is POLICE - dressed in black, faces covered, hard to identify, not answering questions, and bashing people about for no apparent reason.


In our PREVIOUS POST we made the obvious and repeatedly established point that the greatest risk of violence against persons at anti-corruption demonstrations is from police.

Not a single person was hurt or threatened by black bloc demonstrators at G20 in Toronto.

The same cannot be said about police behaviour: See the Real News video below.

They don't make it easy to identify the violent officers either. Here is a picture of G20-Toronto cops with no name tags - No way to identify an individual cop who hits you. 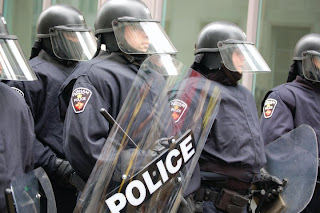 And below is a video with the police chief publicly shrugging off criticism with a suggestion that a bashed journalist can file a complaint... The video shows how small the name tag is when there is one, and there ain't no nice big officer number tag ever.

This video shows a series of disturbing scenes where, for no apparent reason, police run down a pedestrian with their horses, take down a deaf man for not following instructions, punch and throw about several peaceful demonstrators, punch a journalist and steal his microphone, throw back the microphone when other journalists move in, and, last but not least, show the police chief lying to justify the horrendous police behaviour in question.

A nice police state atmosphere with little counter protections: "This is what democracy looks like" - to remix a demonstrator's slogan.

This is the kind of police behaviour that changes one's emotional response to a picture of a police cruiser in flames, especially when it has been made clear that there will not be an investigation.

Partial solution for the immediate danger: The black thugs need big visible reflective officer numbers (front and back), with name lists posted to the web, and all the footage from those surveillance cameras made public every time they come onto the streets with clubs. 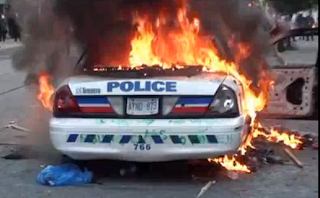 BREAKING NEWS June 28, 2010:
Conditions of 900 G20-Toronto detainees illegal, immoral and dangerous - rabble.ca
RELATED MATTER:
Where was the CCLA's Nathalie Des Rosiers in all of this? -Filing an injunction to prevent the use of sound canons and doing a press presentation about the injunction... but clubs, horses, "rubber" bullets and gas canisters fired at close range, and irrational police violence, with no investigations in sight for attacked journalist and peaceful protesters are just part of the decor? Will the CCLA demand an investigation?
.
Posted by Denis Rancourt at 7:32 PM

Hello Denis. A friend passed me a Globe and Mail clipping about you. Googled you and found your blog. Terrible what happened in TO. Makes me think of Chile in the 1980's. I added you to my blog links and my blog is at http://porkupineblog.blogspot.com/

she is against the ccla people who were detained... that's about it it seems... glad their were no sonic canons there, though...