Data in the study “Against Chomsky” 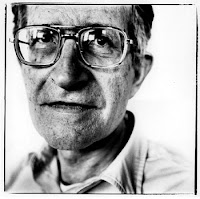 In a previous post entitled “Against Chomsky”, I presented the thesis (developed by Foucault) that Chomsky has avoided significant risk by not taking on his own institution and that he has thereby effectively served power. >>>
..
As Chomsky himself puts it, virtually all intellectuals serve power, including all the left liberal types that are not conscious of their servitude: video-LINK.
..
Chomsky reacted to my thesis, as can be seen in the July 27, 2008, comment to the above post, by offering no counter arguments or supporting examples and stated only that I offered no facts that could be checked. (Is not the record of Chomsky’s actions and writings something that can be checked?)
..
Below is some new data in relation to the thesis that Chomsky mostly serves power. It is an email exchange between physics student Joseph Hickey and Noam Chomsky. In this exchange, Chomsky contrasts my approach of “academic squatting” with how he viewed his own activism course at MIT.
..
Chomsky states “But I did it on my own time, as it should be done. It would simply be kicking my colleagues in the face to insist on doing it within their department.” This position is aligned with that of Stanley Fish whose recent book against academic freedom is entitled “Save the World on Your Own Time.”
..
On one hand Chomsky advances that economic resources and therefore institutions should be democratically controlled (e.g., in Understanding Power), but on the other hand Chomsky confuses academic normalcy and professional elitism with the collegial governance myth of that most hierarchical of corporations – the university.
..
The university executive has complete legal authority on all maters. All committees and councils are purely consultative. Aided by the training that is the tenure track; ass kissing rules. There are no shareholders to contend with and government oversight is mitigated by corporate independence masquerading as “academic freedom.”
..
Getting along with one’s colleagues, in a closed society where virtually no one uses one’s tenure, is what Chomsky advocates. How will the university become more democratic if it is not challenged at its economic heart – in the allocation of resources? How will the university serve people if it is not democratic?
..
Chomsky sees the dissident only in terms of the dissident’s ideas and writes: “Still, in the universities or in any other institution, you can often find some dissidents hanging around in the woodwork—and they can survive in one fashion or another, particularly if they get community support. But if they become too disruptive or too obstreperous—or you know, too effective—they're likely to be kicked out. The standard thing, though, is that they won't make it within the institutions in the first place, particularly if they were that way when they were young—they'll simply be weeded out somewhere along the line. So in most cases, the people who make it through the institutions and are able to remain in them have already internalized the right kinds of beliefs: it's not a problem for them to be obedient, they already are obedient, that's how they got there. And that's pretty much how the ideological control system perpetuates itself in the schools—that's the basic story of how it operates, I think.” LINK
..
Obedient radical professors serve power by making everything about ideas – nothing is occupation or defiance of the physical time-and-space (and grades-and-credits) curriculum. The student is exposed to radical analysis while being constrained in time and place; and the constraints extend into the future via monetary debt and ideological investment and isolation.
..
Chomsky has the most power where he has the strongest tie with the economy, at MIT, in his position as Institute Professor. If you’re not resisting, chances are you’re serving power.
..
..
---------- Forwarded message ----------
From: Joseph Hickey
Date: Tue, Apr 14, 2009 at 11:25 PM
Subject: Fwd: Academic Freedom in Ottawa, Canada (letter to Chomsky)
To:

Further to our correspondence of one month ago, Professor Rancourt has been fired by the University of Ottawa for the reason of giving high grades in one course he taught one year ago. He was fired on March 31, 2009, and now an on-line petition for his reinstatement has been created.

Rancourt has made a public statement regarding his dismissal at: http://rancourt.academicfreedom.ca/component/content/article/25.html

There is now an on-line petition at: http://rancourt.academicfreedom.ca/component/petitions/?view=petition&id=4

I'm sending you this e-mail in the hope that you will be able to add your name to this protest.

firing: http://www.media.uottawa.ca/mediaroom/news-details_1654.html
suspension: http://www.media.uottawa.ca/mediaroom/news-details_1610.html
..
..
..
On Mon, Mar 9, 2009 at 11:16 PM, Noam Chomsky .. I've read the written material you sent. I don't have time to watch videos, I'm afraid. .. As far as I understand, Rancourt was suspended because of his grading decisions. If that is correct, then I would sign a statement protesting that. .. Much of the rest frankly seems to me childish posturing. For example, I taught courses for 25 years at MIT on activism, much of the course devoted to bringing in activists from the community to describe what they were doing. But I did it on my own time, as it should be done. It would simply be kicking my colleagues in the face to insist on doing it within their department. From what I've seen here, his "activism" is confined to the university. I'm afraid that doesn't impress me. Not only my own, but that of academic friends and colleagues, goes far beyond that, in character, risk, international scope, etc. .. As for Fish, I'm afraid that's not a recommendation. .. Noam Chomsky ..
..
..
----- Original Message -----
From: Joseph Hickey
To: Noam Chomsky
Sent: Monday, March 09, 2009 10:55 PM
Subject: Re: Academic Freedom in Ottawa, Canada
..
Hi again Prof. Chomsky,

Thanks for getting back to me. Let me make one more bid for your attention.

1) Not many dissident tenured profs get fired for political reasons in North America. A strong supporter of Rancourt's case, who knows the background well, is your former MIT colleague David F. Noble. Here's a video of him and Rancourt giving a talk together at UofT in January, following Rancourt's suspension:
http://vimeo.com/3060115

Physicist and author of "Disciplined Minds", Jeff Schmidt, who I believe you supported, is also a strong supporter of Rancourt. His letter is not yet up on academicfreedom.ca, unfortunately, but I could send it to you.

2) Rancourt's case was on the front page of the Globe and Mail and has had ample media coverage:
http://www.theglobeandmail.com/servlet/story/RTGAM.20090206.wprof06/BNStory/National/home

Stanley Fish's blog for the New York Times was about him 2 weeks in a row:
http://fish.blogs.nytimes.com/2009/02/08/the-two-languages-of-academic-freedom/

3) All the media, letters, links to video, and background information is very well organized on the website:
http://www.academicfreedom.ca/

4) You may have seen Rancourt's spirited critique of Noam Chomsky, in which he describes the well-known dissident writer as a "non-activist intellectual engaged in analytical penetration of the monster":
http://activistteacher.blogspot.com/2008/07/against-chomsky.html

Thanks for your time,
Sincerely,
Joseph Hickey
..
..
..
On Sun, Mar 8, 2009 at 2:50 PM, Noam Chomsky .. It looks from your letter as though protest is in order, but to proceed I'd have to work through the background, and I'm afraid I'm just not in a position to do that. I'm deluged with similar requests. Each requires inquiry. Sometimes I've been able to work it into a very demanding schedule, but usually not, I'm afraid. I don't like to take a public stand on factual matters without serious investigation. And this case I never even heard of before you wrote. .. Noam Chomsky ..
..
..
----- Original Message -----
From: Joseph Hickey (by way of Noam Chomsky
Posted by Denis Rancourt at 7:14 AM 3 comments:

Interpreting Means and Freire: One Revolution

In the previous POST I quoted American Indian activist Russell Means on the questions of freedom, self, and revolution:
..
"We have self-administration, not self-determination. … In my childhood ... I learned how to be free - you were free to be responsible. … I am a revolutionary. I believe in one revolution - returning back to who you are. One revolution."
..
Revolution is the struggle for liberation from oppression. My understanding of Means’ words is that revolution is rooted in the individual’s fight against her own oppression, a fight that gives the individual her place of influence in the world, the place she is meant to have as a living person.
..
This revolution is a journey of liberation from the effects of oppression on the individual, from the individual’s acceptance of imposed hierarchy, from the oppressor inside that enables the oppression.
..
This revolution is not an escape from or an accommodation to the oppressive power structure but a true liberation of self that must involve asserting self and confronting the oppressor, in order to make one’s place in the expanse stolen by the oppressor.
..
The confrontation against the system of oppression and against the oppressors as persons has consequences: It is a fight. It is a fight for liberation not a fight to oppress. As a “revolution,” the fight transforms the fighter, accompanies discovery of self, and reveals the world. It does not internalize a new oppressor.
..
The fight brings forth those who fight the same oppressor. They fight side by side in co-self-discovery and in shared risks and consequences. This is the meaning of solidarity. It is possible across classes, genders, and races if members from the different groups fight with comparable risks and consequences.
..
I interpret Russel Means to be in intimate agreement with Paulo Freire and with the individualist anarchists. This is what Freire means by “authentic rebellion” in the developing person. I believe that, in hierarchical societies or communities, true self-discovery and meaning are not possible without authentic rebellion.
..
..
RELEVANT WORKS

"We have self-administration, not self-determination."
..
"In my childhood ... I learned how to be free - you were free to be responsible."
..
"I am a revolutionary. I believe in one revolution - returning back to who you are. One revolution."
..

Posted by Denis Rancourt at 5:11 PM No comments: