LAWS THAT PUNISH FOR HYPOTHETICAL HARM MUST BE ABOLISHED

Given the state of laws in Canada, it has become necessary to state the obvious:

An individual legitimately can be punished solely for proven actual harm that is also proven to have been caused by the individual.

Canada and institutions and corporations sanctioned by the State enforce many laws and rules that punish individuals for hypothesized harm, in which the State or State-sanctioned actor does not have to prove actual harm or actual cause.  With these laws, proving actual harm is not relevant in the prosecution, and is considered inadmissible and unacceptably wasteful of court and tribunal resources.

The proceedings are separate and distinct from any criminal proceedings of responsibility for actual physical or psychological harm against an actual and identified victim.

What are these laws, you ask? These are the so-called “hate speech” laws, the codes of conduct, and also the common law of defamation.[1][2][3]  These laws include:


In all of these laws — in a total absence of proven actual harm, from mere expression of comment, opinion, thought or belief, excluding criminal harassment, intimidation or threat against any actual and specific person, often made through the filter of a public social-media platform rather than any face-to-face interaction — the punishments range from fines, to unlimited “damage” awards, to workplace or professional-association discipline, to loss of access to education, to loss of employment, to loss of professional certification, to lengthy jail terms or house arrests, and include gag orders or compelled speech enforced by imprisonment.

Such is the status of Canadian law, despite the fact that Canada has ratified the International Covenant on Civil and Political Rights, which expressly prohibits all such written or unwritten censorship laws.[1][2]

As a result, Canada has spawned a legal landscape not unlike that of past eras having blasphemy laws to prevent the alleged deleterious effects of the most offensive and subversive utterances of the day. This legal landscape vitiates the fundamental right of freedom of expression and incapacitates democracy itself.

Beyond person growth within the fabric of society, freedom of expression plays a second role that is equally important. Democracy is susceptible to capture by a self-interested elite, and politics must not be solely a contest between dominant-elite special interests. The balancing force against runaway capture, in a democracy, is freedom of expression, together with freedom of association, which permit effective democratic participation, and are the true sources of the often touted “transparency” (whistle blowing) and “accountability” (popular opinion making).

Censorship, including censorship actuated with the pretext of preventing hypothetical harm, does not protect the individual.  It is a lockdown designed to frustrate the essential democratic process of expression, discussion, debate and argument, in an increasingly illegitimate and intolerant system. Its use by politicians in exploiting the oppression Olympiad in their partisan manipulations is unconscionable, as is its use in special-interest propaganda by litigation.

In her 2018 book [3], Nadine Strossen brilliantly reviews the research showing that “hate speech” laws are harmful to society. While this scholarship brings current empirical support for abolishing “hate speech” laws, I don’t find it to be satisfying. We should not be reduced to making policy arguments regarding harm reduction in order to justify preventing the State from suppressing fundamental human freedom, or preventing the State from enabling elite interests and corporations from suppressing the said freedom. If history itself and the study of sociology[4] cannot inform us about the necessity to safeguard the fundamental human right of freedom of expression, then we are lost.[5]

Unfortunately, in the present climate of clamouring to ask the State to limit fundamental personal freedoms “for our own safety”, the arguments become polarized, and many have used the sophistry that the position of opposing the aberrant inherent features of “hate speech” law is equivalent to advocating for “free-speech absolutism”.  This is a false equivalency.

If the State were to strike down all “hate speech” laws, limit the codes of conduct to exclude “hate speech”, and strike down the common law of defamation (which presumes falsity, damages and malice), then there would still independently exist: the civil tort of malicious falsehood, the Criminal Code provisions against threats, coercion, intimidation, harassment, and so on; and all the laws against discrimination. The individual would not lose any of these common law, statutory and constitutional protections.

This article has been published at Dissident Voice, and at Research Gate.

[5] “Cause of USA Meltdown and Collapse of Civil Rights”, by Denis Rancourt, Dissident Voice, 7 September 2017. https://dissidentvoice.org/2017/09/cause-of-usa-meltdown-and-collapse-of-civil-rights/
Posted by Denis Rancourt at 9:19 AM No comments: Links to this post 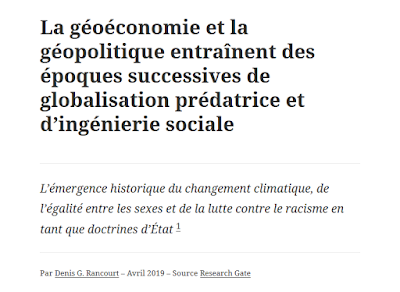 Posted by Denis Rancourt at 9:48 AM No comments: Links to this post

I posted this on Facebook and it generated some interesting discussion.

This is just a conspiracy theory but I think there may be a war raging between (the) two Western elite factions these days:

(1) USA globalists who enforce the US dollar as the global currency, using violent intimidation and destruction, wherever judged necessary, tied to military industrialism and USA corporate interests, (motto: energy, etc. must be traded in US dollars, and we will print lots of dollars...) and

(2) more distributed (USA-UK-EU-G7...) financier globalists who manage the US dollar now but who could manage any global currency and who don't want a world of competing blocks not subservient to a unique world currency (motto: let us handle the money, for optimal stability and development). These boys are more artful at steering the UN, and at social engineering using global imagery (climate, gender equity, etc.), rather than nationalistic sentiment.


This working model helps to interpret many things. Both groups do not want a rising China and Eurasia that goes its own way with currency exchange. Group(1) wants to beat China/Eurasia (MAGA). Group(2) would prefer to entice China/Eurasia into a "more fair and balanced" global exchanges currency.

Republicans are more Group(1), Democrats and "liberals" more Group(2), educated at Harvard. You can put almost any Western leader into one or the other: Macron, Trudeau, Trump, etc. And the visible heads of the two groups are really showing their teeth more than usual. Eurasia is a huge pressure making them fight.

Israel, in my view, is clearly tied to Group(1). It exists by US dollar global currency to enforce said currency requirements in the ME.

Group(1) has the guns. Group(2) has the greater elite networks. Fascinating fight.

Posted by Denis Rancourt at 9:29 AM No comments: Links to this post