Tectonic Shifts Unnerve Both Factions of the USA Ruling Elite 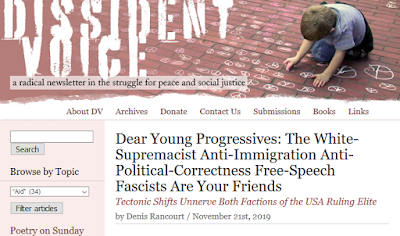 Tectonic Shifts Unnerve Both Factions of the USA Ruling Elite

In this article, I argue that the real enemy is the ruling elite, which manipulates us all. I explain that the Western USA-based ruling elite is desperate these days, and exceptionally adversarial, which is driven by the successful rise of Eurasia (economically led by China, and supported by Russia), and by increased global abundance of extractable energy reserves. We allow ourselves to be collateral idiots and pawns in this saga.

The ruling elite and the captured media want you to be convinced that their oppression of everyone comes from either a tsunami of irrational “socialism” or spontaneous upsurges of “fascism”; that fascist cells are nucleating and growing at an unprecedented rate, and that you and all your immigrant, brown, black, LGBTQ compatriots will be deported or imprisoned or deprived of medical attention, if the said cells are not deplatformed, censored, run out of town, punched in the face, and exterminated.

Actually, no, that is not true.

The ruling elite in the USA, and in the Western world, by projection, are comprised of two opposing and collaborating factions: The “Democrats” and the “Republicans”, which represent different and overlapping blocs of the Western ruling elite.[1][2][3][4]

Both blocs or networks agree to use military force and covert means to exploit and extort, in the world that they consider their plantation. Both networks use their influence to constantly transform national and global rules to their advantage, to the point even of literally writing the laws, and to the brink of destabilizing the USA domestic society itself,[5] and the global economic and strategic balance.

The ruling elite (acting together, consistently and deeply) manipulate, socially engineer, and exploit the rest of us, to different qualities and degrees, depending on social class. The main mechanism is to divide to conquer. The divisions are first along class lines, and, within classes, along cultural, race, religion, and gender lines.

Democracy is a constant threat to the ruling elite. Therefore, democracy must be constrained to a manageable form, and crushed wherever it actually emerges. The remnants of electoral democracy are used in more-or-less a show-competition between the two opposing networks, which serves them both by floating the illusion of popular participation and by dividing the public.

The “Democrats” are tied to global finance and push for a global carbon economy, and global “development”, in the image of their malicious interest. Their deep-state base is the CIA and they excel in media and entertainment-industry control.

The “Republicans” are more tied to the USA domestic-energy sector (such as the exploded shale-oil economy), to the army, and to the armament industry. They are more nationalist in their power centre, more into the extraction and wage-slave-production industries in Latin America and Africa, via USA corporations, and have less use for the UN in their manipulations.

Both ruling-elite networks have collaborated together since the end of the Second World War, with the deep state, to establish and maintain the USA dollar as the global currency, which is their most potent weapon of global exploitation, and now overt extortion, backed by violent military interventions, campaigns of economic devastation, and covert coups and proxy wars.[6][7]

Fast-forward to today: Two global tectonic shifts have and are occurring, which fundamentally threaten the USA/Western ruling elite, in that USA hegemony itself is challenged.

The first global tectonic shift is the continuous rise of Eurasia, economically led by China, with strategic, diplomatic and organizational support from Russia. This coincides with Russian emergence in protecting its national interests in Syria and Venezuela, while offering military technology (S-400 air-defence missile system) that neutralizes USA air dominance, to Turkey and others.

The second global tectonic shift is the increased global abundance of easily extractable fossil-fuel reserves. It turns out that shale-oil is everywhere, as is natural gas; and Chinese coal, not counting secure imports,[8] is plentiful enough to power China, using modern centralized generation and transformation stations, for decades. There is oil and gas in Venezuela, Russia, Syria, Iran… Canada, USA… more places than can easily be controlled to starve competitors, to ensure high prices for preferred producers, and to keep the petro-dollar alive.[6]

These global tectonic shifts divide the ruling elite, as they scramble to settle and impose a response strategy, and as their differing economic interests collide.

The globalist “Democrats” want an enforced carbon economy (to save humanity) and a crypto-currency that they control,[9] and, in their daydream, want to include Eurasia, the whole shebang. They don’t want all-out trade wars that drive Eurasian exclusionary integration. They prefer covert power rather than military campaigns, and prefer to preserve the UN as a tool.

They are content to deprive their ruling-elite adversaries of oil-supremacy if they can keep finance supremacy, enforced by military might as needed. They are habituated to occupation by social engineering, and hope for an entire world woke to climate change, public health by vaccination, life-extension by big-pharma, food abundance by GMOs and glyphosate, and human rights by gender-reassignment medical and pharmaceutical procedures, “anti-racism” and “gender equity”.[6][7]

The nationalist “Republicans” want to control oil by force, using blockades, sanctions, and military occupation (Russia, Iran, Syria, Venezuela, even Canada in a pipeline-propaganda war[10]), sell USA oil at top dollar (with an emphasis on “dollar”), save the USA-dollar-as-world-currency gravy train, and extort military-protection rent and arms sales from its “allies”, while making Eurasia enemy number one.

In a nutshell, the governing elite are running a vast and violent exploitation and extortion racket that is now in decline in the world. The decline is putting tremendous pressure on the scheme, and the elite are desperately lashing out to slow or reverse the inevitable. Their disagreements are more urgent than ever, and they are willing to have unprecedented adversarial battles in the open, and to use us all as triggered or engaged idiots.

“White supremacists” are just ordinary folks sick of being manipulated and cheated by the ruling elite. “Black bloc” anarchists are ordinary youth sick of being brushed aside and made irrelevant by the ruling elite. Both need to see the strings and stop looking for schoolyard fights. Our best friends need to be all those harmed by the same elite manipulators. Our worst immediate enemies are the collaborators. We need to treat words as words, and stop looking to punish our compatriots. The enemy of my enemy is my friend, and the “white supremacists” are thereby eminently your friends.

Free-speech enthusiasts are right of course but they need to see those wanting false protection from censorship as merely misguided targets of the common enemy. It is the enemy that is implementing the censorship, not snowflakes. The elite will censor using any pretext. Woke automatons are just proof of the broad destructive power of social engineering. Woke automatons are not the enemy of the Right: Ignore them, insult them if this has civil-jolt value, but focus on the real enemy. The real enemy determines school curricula, writes laws, attacks democracy, censors speech, funds everything, and campaigns for war.

[5] “Cause of USA Meltdown and Collapse of Civil Rights”, by Denis Rancourt, Dissident Voice, 7 September 2017. https://dissidentvoice.org/2017/09/cause-of-usa-meltdown-and-collapse-of-civil-rights/

[10] “Over a Barrel”, Documentary Film, 8 October 2019 (Canada), producer Shane Fennessey, based on the research of Vivian Krause. www.overabarreldoc.com

Posted by Denis Rancourt at 8:03 AM No comments:

LAND ACKNOWLEDGEMENTS are now institutionalized, and that is no accident 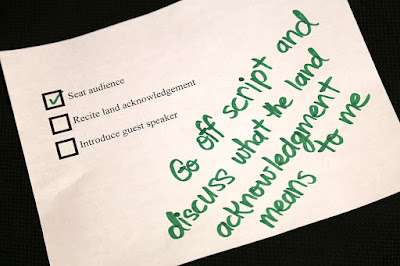 I hate those prayer-like public land acknowledgements because they are pure virtue signaling and intended to push a religion of historical interpretation (guardians of nature itself, etc.), and of response to the said interpretation. They are institutionalized social engineering.

I have no problem acknowledging that the State perpetrated on on-going genocide against aboriginal peoples in Canada, and that this is Canada's major foundational and active mass war crime, but those acknowledgements are an intrinsic part of the cover-up, IMO, and to me the words are like the scratching-on-the-blackboard sound of my institutional school days.

When Israel starts doing it, we will know that its genocide is complete and irreversible.
Posted by Denis Rancourt at 7:05 AM No comments:

Freedom of speech is not a "value in society" 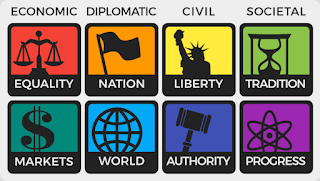 My social-theory thought for today:

Rather, free speech is a foundational structural rule that prevents runaway totalitarianism from occurring in the societal dominance hierarchy, by guaranteeing this venue for the individual to fight back against excessive suppression of individual rights and interests -- and, by extension, collective rights and interests, via free association.

So tired of hearing that free speech is a value or right that can be balanced against other values or rights. No, it cannot. Individual free speech itself (separate from any concomitant crimes such as violent intimidation, persistent harassment, illegitimate use of power, etc.), for the purpose of individual influence by expression, must be absolute to serve its purpose.

And read my 2016 article entitled: << Towards a Rational Legal Philosophy of Individual Rights >>.
Posted by Denis Rancourt at 6:26 AM No comments: