Freedom of speech is on the endangered list: full interview 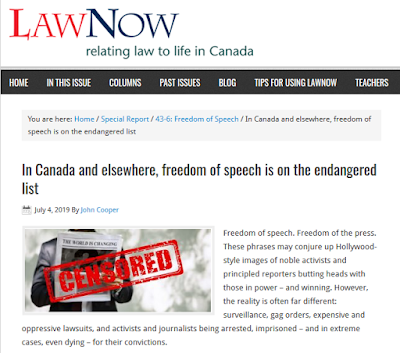 
In Canada and elsewhere, freedom of speech is on the endangered list

Here is the full interview with OCLA Researcher Dr. Denis Rancourt, which Dr. Cooper made in preparation for his article. The interview was organized through OCLA. It represents the spontaneous answers of Dr. Rancourt, not an official position statement.

The overriding threat to press freedom for corporate journalists is near-absolute absence of professional independence. Journalists pander to the stated and unstated directives of their publishers. Careerism and job security rule the press office. This has been amply demonstrated in many academic studies. To the extent that the corporate media is a regulator in the democratic system, there has been complete regulatory capture.

Western corporate-media and business-media journalistic freedom existed after the Second World War, thanks to rapid economic growth and opportunities for small and medium-size publishers to sell advertisement to a large array of advertisers. Increasing globalization and corporate mergers (of both corporate advertisers and corporate media), and direct security-State oversight and infiltration, have closed that transitory window of freedom.

In the present era, corporate media really is “fake news”, both in content and by avoidance or omission of content that is vital to democratic societies in States involved in world affairs. It is propaganda. Its utility for analysts is in informing us of what the establishment wants us to think, and, therefore, in identifying some of the establishment’s main preoccupations.

That is the elephant in the room regarding the now mythical press freedom of the corporate media. There are a few old guys left, who can negotiate assignments, but their headlines get trashed. Otherwise, the proverbial “two sides of the story” are carefully confined, and more and more frequently there is only one side, since the “other side” only serves as a repugnancy magnet, as with classic propaganda.

The challenges to press freedom for social-network journalists are quite different. Here, there are direct structural assaults against this democratized form of media. The assaults include: barring from the publication venues, blatant censorship following publication, demonetization, shadow banning, corporate manipulation of search results, and so on. In addition, Canada, for example, is implementing laws to regulate the censorship of independent media, using express pretexts that include: foreign interference in elections, preventing “hate”, and generally preventing “undesirable” views declared to be harmful to society. We can add the spectre of civil defamation law assaults, and Criminal Code prosecutions for victimless crimes of expression, all of which the Ontario Civil Liberties Association has consistently attempted to push back. This is a censorship era. We are at the level of the Soviet Union regulating access to photocopying machines.

Q: How are some of these challenges handled?

A: The challenge of corporate media press freedom is handled, primarily in three ways.

Second, the two competing corporate media, in this limited-view media-scape world, draw on social-network technology to boost their influence, thus somewhat levelling the coarse imbalance of means between the two camps. Trump tweets, social-media stars leak into corporate coverage as commentators, and so on.

Third, and most significantly, independent social-network journalists release vital reports and information that otherwise would never see the light of day. Sometimes, the information is so compelling and reaches such a wide audience that the corporate media cannot ignore it, and struggles to recast it. This is the undeniable contribution of Wikileaks, which is mostly ignored by the corporate media and academics, but which has exposed the greatest known systems of corruption and crimes in the Western world.

There are many others than just Julian Assange in social-network journalism — in a large organic network of contributors, publishers, whistleblowers, leakers, and researchers — but the vicious and sustained attacks against Assange most graphically proves the influence of social-network media, and its threat to the corporate media propaganda edifice.

Regarding loss of publication venues and censorship, social-network media handle this by exploiting windows of alternative venues and the ever changing technological landscape, in the same way that pamphleteers of the past exploited press technology, from silk screens to photocopiers and guerilla radio transmitters.

Q: With the advent of a dense and intense social media landscape, how challenging is the issue especially in light of concerns over ‘fake media?’

A: The “concerns over fake media”, expressed by the dominant corporate media and its associated pundits and politicians, is a crass pretext for outright State and corporate censorship. The said pretext is an assault against the presumption that citizens in a democratic society have the ability to judge and decide if they are allowed access to the broadest possible sources of information. The population will have been infantilized to the degree that it will accept the said pretext as legitimate.

Q: How confident are journalists in the ability of their media outlets to protect their free speech rights?

A: As a general rule, corporate media journalists are part of corporate media, and do not have a valid concept of or a surviving individual impulse for journalistic independence, nor are they given the time and freedom to research, except at the elite level where editorial wishes are fully assimilated.
There are exceptions, as rare reports, that prove the rule, but red lines are never crossed. There are also exceptions with specific journalists at niche outfits, such as reports in the Haaretz newspaper of Israel. But these repeated exceptions can only exist in societal circumstances in which they can have no substantial influence beyond selling copy to a niche audience or serving as a lightning rod for the dominant paradigm.

Social-network journalists, on the other hand, are confident that the technological venues they rely on for publication will always be assailed by dominant forces. They reasonably have little confidence that the courts can effectively protect their freedom of expression rights, nor do they have the resources to use the courts, nor does pro bono law exist anymore that would be of use in this regard, because of corporate capture of the legal profession.

Furthermore, the Supreme Court of Canada has not exactly been progressive in its freedom of expression decisions. It likes to distinguish “useful expression in a democracy” from “expression not worthy of protection”, it condones the common law of defamation, which violates universal standards of protection of freedom of expression, and it regularly makes regressive applications of the Canadian Charter of Rights and Freedoms loopholes that are sections 1 and 32.

Q: What changes have you seen over time (i.e. is press freedom being reduced? Is it growing?)

A: There can be no doubt that suppression of freedom has progressed, from the post-war Bretton Woods economic era, to the popular movements of the 1960s and 1970s, to the establishment’s coordinated assaults against democracy of the 1980s, to the aggressive new era of globalization starting in the 1990s, to the global corporate and finance mega-merger sprees of the late 1990s and mid-2000s.

The economic and institutional and statutory transformations were accompanied by large-scale social engineering of attitudes and beliefs, related to the emergent culture of “safe spaces”, and of “hate speech” as being assimilated with physical or psychological violence against specific and identified individual persons.

These economic and societal transformations have been outlined in the Ontario Civil Liberties Association’s published “OCLA Report 2019-1”.

Q: Are there more challenges/barriers to journalists reporting on the important issues at hand?

A: With corporate media, in a nutshell, there cannot be a “challenge” in preserving press freedom where there is no press freedom.

Q: What do you think the future holds for journalists in terms of freedom of speech and freedom of the press?