One year ago - Spontaneous enthusiasm about anarchist teaching practice 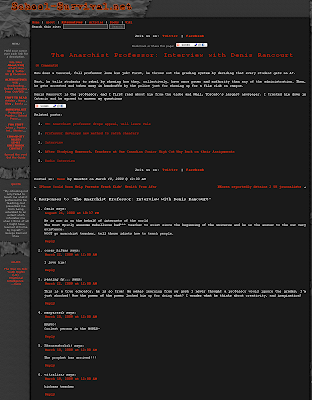 LINK to the school-survival.net blog article

The Real News Network's coverage of climategate was pathetic (readers of the present blog know our views on climategate - we told you so... LINK-1, LINK-2). However, the Network's reports on Latin America and on the Israel-Palestine conflict are often outstanding (HERE and HERE).

And generally, The Real News Network's coverage/commentary about economic questions is lost in left theory and not exactly bold. But recently, the Network has featured star analyst and renown whistleblower William K. Black and that just makes up for so much mush...

And at least three more video interviews like this that must be watched: PART-2, PART-3, PART-4. Black is brilliant in speaking truth to whoever will listen - and its a big truth.

And the mystery is: Why hasn't Bill Black been killed?

Here is my proposed answer and an alternative answer.

Because (1) he's not having any real impact on public opinion, thanks to media blackout; (2) he's nonetheless known and in the public eye, as an accomplished author and commentator; (3) looks bad when you start killing university professors; and (4) if you go after him viciously it could backfire and further expose those that want him dead.

Savings and Loan scandal top bankster Charles Keating sent a memo in 1987 "If you can't get Wright and Congress to get Black - kill him dead - ..." LINK.

Alternatively, they did kill Black dead: He's now just a small town university professor. Probably grades his students fairly. Far away from any government regulatory agency where he would be desperately needed...

"Disciplined Minds - A critical look at salaried professionals and the soul-battering system that shapes their lives" by Jeff Schmidt is the most important book written which does a social analysis of the professional worker and of professional training at graduate and professional schools.

Among other things, the book is a brilliant survival guide.

In these three videos (below) its author speaks at an academic freedom conference held at New York University on April 3, 2009. (Speaker introduction of Jeff Schmidt HERE.)


RELATED INFORMATION:
-A document discussing the legal status of academic freedom in Canada HERE.
-Denis Rancourt talk in the same panel HERE.
Posted by Denis Rancourt at 8:46 PM No comments:

Too many left intellectuals and progressive types have ridiculed or avoided the 911 Truth Movement so now I must embed this video.

Too many left analysts have used 911 to support their favorite theories about US foreign policy and blowback and the like and to support their wistful hopes that backlash might slow the Empire's killing machine and so on so now I am compelled to embed this video.

As a physicist and as an independent thinker I don't yet believe that the two main towers collapsed from traditional demolition, mainly because I don't know enough about the demolition of buildings. Also because the above-impact sections of the collapsing towers fall onto the lower sections which remain unaccelerated until impacted by the falling sections. Overall, however, the type of demolition is a minor point.

The fact that Building-7 was "pulled" on the other hand is enormous. You don't setup an operation like that in a few hours and it's NOT the fire department that does it!

And you need a damn good cover before you can just "pull" a 47-story building in the middle of New York... That, in turn, suggests you don't want them terrorist Cessna pilots to miss the target or be overtaken by the passengers...

And those photos of the extra appendages on the planes are rather compelling.

The Pentagon story of the mega jet in the small hole with no Pentagon video worth anything to be had is ludicrous. The engines are the only real projectiles on a jet plane - I learned that as a graduate student talking with nuclear accident simulation experts.

The Military-Industrial-Financial-Congressional complex has a lot of glue, a lot of blind spots, and plenty of motive. It doesn't investigate itself and it owns everybody with any influence. Taadaaa.

But I don't think that Truth as information alone can change anything. If everyone joined the 911 Truth Movement it would not change anything. Power has power. It holds us via our connection to the economy. You have to fight it at work and at school, not by evening and weekend truth seeking and truth telling. More democracy and transparency at work makes the whole system more democratic. And the fight makes you know and makes you strong. Truth is not in information. It's in what you are from not belonging to someone else. Information never changed anything. You don't act because you have information. You act when you've had enough of not being allowed to make your life.

That's my two cents, one cent per tower.
Posted by Denis Rancourt at 8:01 PM 5 comments:

Nobody owns Iceland except the Icelanders

Iceland is a magical place where they have some democracy. A place where citizens can use referendums to kill government national economic plans.

Just recently 94% of Icelanders rejected the government's deal to repay the national debt, forcing the politicos to negotiate a better deal or die.

What is it with this idea to mortgage present and future generations of a nation to pay back some contrived debt arising more from colluding politicians and financial slight of hand than anything else?

The entire capitalist justification for interest on a loan is that lending costs money because some borrowers default. Interest is a risk benefit. It's not capitalism if you remove the risk by not allowing defaults - it's extortion.

It's extortion when financiers lend beyond the capacity of the borrower, at interest rates set by the lender, and then force an entire citizenry and their unborn children to pay back.

The entire money as debt scam needs to be taught in primary school and rejected outright.

In Iceland citizens are setting the terms. They've had it with a hen house managed by the fox. The sign says "Power To The People" and they mean it.

Go Iceland! Put your politicians in check. Throw the banks out to the sea. The land belongs to she who works it.

Just two examples... to critique and think about...

(2) AND THIS VIDEO REPORT AT DEMOCRACY NOW

And all this only makes sense within Paulo's praxis: Information has no meaning outside of the real fight.
Posted by Denis Rancourt at 7:23 PM No comments:

Members of College and University Workers United (CUWU) have sent a strong open letter of protest to the University of Ottawa's President Allan Rock.

"We, the undersigned members of College and University Workers United (CUWU), know Dr Denis Rancourt to be a dedicated educator and a fearless defender of justice. We know Denis Rancourt to stand for human rights and students' rights. We are thankful to count Denis Rancourt among the rare public intellectuals who do not compromise their principles when they become aware of institutional folly; but instead use their positions to expose and correct flawed practices.

We conclude that the charges advanced against Denis Rancourt are a contrived pretext, that they are preposterous as reasons to summarily remove a tenured professor, and that, therefore, the real reasons must lie elsewhere. We conclude that this was a political firing to remove a dissident academic who was also critical of the university administration and supportive of student efforts to reform the institution towards greater student power. "

The full text of the letter from members of CUWU is posted HERE.

Many more letters of protest from professors outside the U of O are posted HERE.
Posted by Denis Rancourt at 5:58 PM No comments: