If Robert F. Williams could speak to BLM...

If Robert F. Williams could speak to Black Lives Matter militants, he might remind them of this central problem in any organized liberation struggle... the problem of the supported network of collaborators.

"I learned in Atlanta that Mr. Elijah Muhammed had made quite an impression and that many Afro-Americans are learning, to the consternation and embarrassment of the black respectable leadership, that he has more to offer than weak prayers of deliverance. A prominent minister in South Carolina said, "Our biggest stumbling block is the Uncle Tom minister--the people must stop paying these traitors." In Atlanta, a university professor, energetic about the new spirit on the part of the Negroes, was very hopeful that new militant leadership would replace the old Uncle Toms, whose days, he was confident, were numbered.

There are exceptions among us. The Uncle Toms, the Judases, and the Quislings of the black "elite" would deny this rising consciousness. They do everything possible to make white Americans think that it is not true, while apologizing to us for the very people who oppress us. Some of these "responsible" Negroes are afraid that militant action damages "amiable race relations." They complain that race relations may deteriorate to a point that many Negroes may lose jobs. What they mean is that they may lose their (ital.) jobs. For the black workers, who are the first to be fired, and last, if ever, to be hired, the situation is so bad it can't deteriorate.

We realize that there must be a struggle within our own ranks to take the leadership away from the black Quislings who betray us. Then the white liberals who are dumping hundreds of thousands of dollars into our struggle in the South to convert us to pacifism will have to accept our (ital.) understanding of the situation or drop their liberal pretensions." [Bold-emphasis added.]


Posted by Denis Rancourt at 1:53 PM No comments:

Left Analysts: Clinton Presidency Would Be More Criminal and Murderous Than Anything Trump 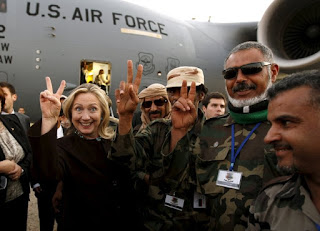 Many left analysts from all sectors predict that a Clinton presidency would mean savage wars like nothing nationalist Trump would do.

Hillary Clinton: the Queen of Chaos and the Threat of World War III
March 10, 2016
Maidhc Ó Cathail and Diana Johnstone

Exposed: The US is an Oligarchy Ruled by Billionaires and Dictators
April 17, 2016
Vanessa Beeley

We came, we saw, he died
February 2015
Jackson Lears

Hillary Clinton, the Council on Foreign Relations and the Establishment
February 24, 2016
Matt Peppe

From The Bannerman Report, written in 1907 by British prime minister Henry Campbell Bannerman:

“There are people (the Arabs, Editor’s Note) who control spacious territories teeming with manifest and hidden resources. They dominate the intersections of world routes. Their lands were the cradles of human civilizations and religions. These people have one faith, one language, one history and the same aspirations. No natural barriers can isolate these people from one another … if, per chance, this nation were to be unified into one state, it would then take the fate of the world into its hands and would separate Europe from the rest of the world. Taking these considerations seriously, a foreign body should be planted in the heart of this nation to prevent the convergence of its wings in such a way that it could exhaust its powers in never-ending wars. It could also serve as a springboard for the West to gain its coveted objects.”

Cited by Tariq Ali in “Blinded by Israel, Visionless in Gaza,” Counterpunch, July 23, 2014