The first victim of education

The First World education complex is responsible to create the professional managerial force that advances and maintains the global North-South exploitative flux of human and natural resources; and, therefore, is responsible for a deeply-racist planetary-scale genocidal pillaging using continuous war in conjunction with financial predation.

It also is responsible for the indoctrination to maintain a vicious class hierarchy at home without which manning Empire would be impossible.

Yes, but that is too easy. As long as we only write about it we contribute to it. As long as we advance that education is the answer to education, we strengthen it. We must instead recognize that the first-line of defence lies in our own bodies, as we -- students and teachers -- are the first-line victims of education.

The first-line of defence against global madness, the only line that we are part-of, is our own personal rebellion against our own oppression. And overwhelmingly the dominant first-tier oppression against privileged-sector First World individuals is education, from pre-school to professional school. [1]

The first victim of education is the student. [1]

This is evident to graduate school and professional school students because the myth until then is to prepare for "real learning" up ahead. But the "real learning" never materializes. Professional schools must brainwash students to believe they have learned something and to accept to function as con artists (doctors, lawyers, bankers, scientists, etc.) in society. [2][3]

It is so difficult for many to accept that this is all the learning to be had that they willingly participate in their own brainwashing to believe they have acquired competence and knowledge, as part of self-preservation. The brainwashing is the major tour de force in the finishing of graduates. Often it is only accomplished in the internship, residency, or post-doctoral phase.

Here, the first victim is the new graduate who realizes that he/she knows nothing after some 25 or more years of grueling institutionalization, a large financial debt, and despite all the high grades and diplomas.

I once challenged a graduating top-of-her-class MD about her ignorance and she willingly admitted that in fact she knew nothing, absolutely nothing. Two years of residency later it was impossible to have that conversation. She still knew nothing.

My own experience was similar as a physicist-in-training. I was torn between the self-knowledge of my ignorance, despite the small pieces I came to have an impression of grasping, and my stellar professional advancement in terms of published papers, scholarships, high grades, and conference invitations. Everything pushed me to act-as-if and to assume a professional stance.

Next, in the classroom, my ignorance needed to be the most remote in appearance of all, whereas it would have been the most formidable pedagogic tool. Only after more than a decade of teaching would I start to discover critical pedagogy, largely by accident and thanks to a stubborn desire to be true, and only as rebellion against the oppression of conventional teaching.

Then I would learn of the establishment's false critical pedagogy sector and the side industry that it is...

As Paulo Freire would say, you can only fight your own oppression and that is the most you can do. The real front of resistance is in the body of the first-tier victim. The intensity of the victim's rebellion is the magnitude of the resistance. The rest, outside of praxis, is academic blah blah which only strengthens the oppressor's grip.

If you are not suffering significant backlash then that is evidence that you are contributing to the oppression and if you have been integrated (buried) it's a sign you are dead. Enjoy your shallow "life" and may your children be just like you.

Other essays by Denis G. Rancourt
Posted by Denis Rancourt at 3:33 PM 1 comment:

"Anti-racism" in support of racism

The First World education complex is responsible to create the professional managerial force that advances and maintains the global North-South exploitative flux of human and natural resources; and also partly or largely responsible for intra-Empire mythology, the obvious military-technology dominance, local-elite management, and supporting and developing empire-workforce and manager self-image survival strategies in the face of genocidal oppression and perpetual war.

The binary oppressor-oppressed pair is rooted in racism, a racism most apparent on the front and most denied at home.

In the heart of the Empire, a most powerful denial mechanism of the system's vicious racism of death is to vocally expend energy purporting to eliminate race bias in the selection of professional workers to integrate the exploitative hierarchy and to loudly celebrate this "success" in terms of obedient Black judges, professors, CEOs, presidents, etc.

For the denial strategy to work, it is essential that no criticism of the strategy itself be allowed and that any such criticism be itself virulently attacked as racist. In this way, the activism in the "anti-racism" of "equity" or "affirmative action" in professional circles becomes a dominant home-front battle in support of front-line racism both at home (prisons, reservations, poverty, etc.) and abroad (war, genocide, economic predation, etc.).

Virulent defenders of equity for elite workers scream "racism" so loudly -- while referring to the on-going Black North American holocaust -- that the term loses its meaning. And critics white or black who might suggest that to integrate is to participate are mobbed.

Malcolm X's thrust for rebellion, self-preservation, self-defence, and non-integration is lost. And his lessons about house and field negros are consumed and re-cast in the "light" of academia-born "critical race theory" (LINK).

All of a sudden "house negro", as a defamatory term and as a basis for defamation lawsuits, means "a person who is a race traitor" and "a person who is a pariah in the black community" [1][2][3][4]. I don't think the media-reported critics who applied the term to Condoleezza Rice and Barrack Obama in any way meant to suggest that these public figures were pariahs in "the" black community...?

Without discernment of class the terms "community", "race", and "pariah" have no truthful meanings and are used only to mask inter-class oppression.

Without effective criticism which goes to the root of self-image, our discourse can only support the oppression rooted in racism. Academic blah blah can only be harmful and this may be an example of that, a reflex learned in my own indoctrination (called education)?

Other essays by Denis G. Rancourt
Posted by Denis Rancourt at 10:04 AM 1 comment:

Ups and downs of the open court principle in Ontario 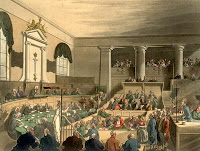 
Recently, there has been some discussion on the Canadian law web site SLAW about an Ontario Superior Court of Justice ruling that is argued to have set legal precedent regarding attendance of public observers and media at court-supervised out-of-court cross-examinations.

The ruling on a procedural motion is HERE (see paragraph-20). The SLAW article is HERE.

I disagree that an unambiguous precedent has been set and I disagree with the ruling on this point. I argue that both the judge (Master) and the legal commentator (SLAW article author) erred in law by following the plaintiff (moving party) in not sufficiently discerning a cross-examination for discovery on the one hand and a cross-examination on an affidavit on a motion on the other hand.

In arguing a motion in Ontario, the evidence put on the public record in the open court is filed as affidavits in the Motion Record. Once filed in this way, the evidence has the same status as sworn evidence presented in court and is subject to cross-examination (as I have learned from hard-earned experience).

Otherwise, one has abridged the open-court principle without any fundamental justification.

A cross-examination (or examination) for discovery is a different situation where new evidence is "discovered" that may never be put on the public record (may never be filed as evidence), that is privileged, and that is legitimately subject to privacy protection.

Discovery is to "discover" whereas cross-examination on filed public record evidence is to test the evidence, just as it would be in open court. The submitter of evidence must be prepared to be cross-examined in public, unless the court orders otherwise for special reasons.

One problem arises with the asymmetry that in affidavits on motions in Ontario hearsay "evidence" is permitted (see Rules of Civil Procedure, Ontario). In this way, a client can be shielded from cross-examination by a lawyer who submits affidavit statements with the client's evidence in hearsay.

In addition, regarding the protection of privacy which the invoked concepts of discovery privilege and assumed undertaking (to not disclose) are meant to achieve, this was a situation where the defendant being cross-examined wanted public observation in the examination of his own information. The defendant also, in this case, filed the entire cross-examination court reporter transcript into public record evidence. These circumstances were not considered by the Master.

In the specific case, the plaintiff's complaint that one of the observers blogged an objectionable critique of the cross-examination was used partly to justify the Master's Decision without a complete examination of the merits of the critique, and the blogger's critique was partly re-posted on SLAW (HERE).

[20] Mr. Rancourt objects to such direction on the basis of the open court principle. In that he is misguided. Cross examination or discovery does not take place in open court (although it does take place under court supervision). It is only once a transcript or portions of a transcript are tendered in evidence that they become part of the court record. Motion records and exhibits at trial are part of the court record. Court hearings (such as this motion) are held in open court though that was not always the case. Prior to adoption of the “new rules” chambers motions were not considered to be in open court or on the record. In any event it is quite clear that there is no right for the public to attend an examination out of court at the office of the special examiner or court reporter. Even were that not the case however, the court could give direction about the conduct of such examinations.

[21] There will be a follow up cross examination if the plaintiff wishes it. No one but the parties and their lawyers and the reporter may be in attendance unless otherwise agreed.

The Master's need to make a ruling the same day (given a next day's hearing of the main motion) and the usual constraints of limited court resources were also mitigating factors.

I believe that the question of public attendance at cross-examinations on affidavits on motions in Ontario largely remains an open question, one that opposing counsel's should consider in view of preserving and extending the open court principle without which we may as well abandon all illusions of an equitable system of justice management.

Links to all pleadings and court records in the main action are posted HERE. U of O Watch commentary articles are HERE.
Posted by Denis Rancourt at 5:01 AM No comments:

Jonathon Bullick is making this film and he wants your help if you knew David F. Noble.