"Anti-racism" is the best cover up for the extreme direct and covert military violence of the Obama-Clinton administrations, and the best propaganda that Democrat and Trump provisions of war and domestic injustice are discernible.

And we lap it up. The merchants of outrage are having a field day. 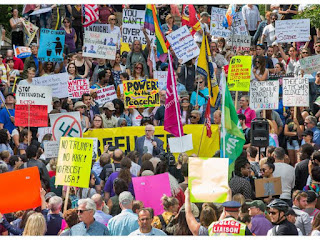 Posted by Denis Rancourt at 8:48 AM No comments:

The Mike Duffy lawsuit is good for civil rights advocacy

<< Senator Mike Duffy is suing the federal government for nearly $8-million, saying the Senate and the RCMP unjustly made him a scapegoat ... (link) >>


Irrespective of public opinion about Duffy's behaviour, it is clear on its face that the PMO was shielded by the police and legal establishment.

This lawsuit is push-back against an intrinsically and highly biased police and court system in Canada.

It has little chance of success against that deplorable intrinsic bias but the effort is a service to society.

The law and rules of ethics must apply equally to all, including the PMO, and police and justice institutions must ensure that it does.

The shielding was actuated by throwing Duffy under the bus, whereas they all deserved to be punished for shady dealings. Good that the chosen target is fighting back.

Posted by Denis Rancourt at 8:16 AM No comments:

The Things That Disturb Me Most


The things that disturb me most, in order of concern.

When government institutions and corporations attack me and my family to suppress my democratic participation and to gag me and deprive me of my societal position.

When my own society is occupied and degraded by foreign and special interest plutocrats, constantly engineering public institutions towards stupidity and manipulated fabricated conflicts.

The vicious occupation and dispossession that Israel practices in Palestine, because it is immoral and because an unduly influential Israel lobby in my own country manipulates Canada into co-criminality with Israel and intimidates and attacks public-intellectual opponents of Israel's criminality.

The vicious proxy, economic and military occupations and covert interferences of the USA against Latin America, Africa, the Middle East... because my own country has been made a subservient "partner" in this empire of exploitation.

The violence of the Western educational system in gutting individuals of independent thought and self-worth, and its successes in doing so.

The rampant self-interested use of sophistry by the Western professional classes, and the ease with which the sophistry is adopted at large.

The undue and harmful influence of establishment medicine in defining "health" and our fundamental personal values.

The ease with which the global-warming farce was made the paradigm of mass manipulation that it continues to threaten to be.

Posted by Denis Rancourt at 2:11 PM No comments:

A potential Nazi-ideology threat in USA-Canada is best addressed by freedom of speech and insisting on civil rights [see Endnote].

White nationalism is a diverse social movement made of people whose fundamental rights in the democracy must be respected.

Otherwise, the suppression will amplify their alienation. Instead we must respect everyone as human beings and protect their rights to express their views, to freely associate, to attempt to influence society... The answer is to engage in good faith, in respect of human rights.

Suppression and alienation can only produce a heightened risk of physical violence and organized terrorism, or destroyed humanity if taken to the limit of genocide, as is occurring in our on-going "past" (aboriginal, black...). Let's not go there. Let's stop spiraling into outrage. There is no need to make Canada into a Ukraine or a Saudi Arabia or, dare I say, an occupying Israel. Let us stop Canada's on-going suppressions before we create more suppressions.

Open dialogue and toning down knee-jerk outrage is the way to go. Follow the advice of Malcolm X and accept to sit at the same table, in the light of day, with all those who have societal grievances. "Nazis" are a hell of a lot easier to cure then the plutocrats that constantly undermine democracy for their continued gain, and manipulate folks to fight each other.

I know a lot of raving idiots (who are otherwise fine and decent people) will assert that I am hereby "supporting Nazis" but those folks are wrong and are part of the problem.

OCLA Calls on the Government and Media to Exercise Calm, Reason and Objectivity

The Ontario Civil Liberties Association (OCLA) calls on the government and media to exercise calm, reason and objectivity in civil rights matters.

Civil rights are unjustly abated by reacting governments and opportunist media corporations in times when terrorist events have a potential to cause widespread outrage.

The breadth and intensity of public outrage are often disproportionate to actual danger, have a biological origin in the collective fright and flight response of social animals, and are exploited and amplified by media using narrow and selective coverage.

Frenzies can result, which lead to witch hunts, free rein of enforcers of social norms, and hastily drafted unwise legislation. In addition, society-wide artificially induced outrage and fear can alter an insecure or vulnerable individual’s view of society, in a direction opposite to trust and community.

Several cases of such “cooperative outrage” are listed below, which are presently playing out in Ontario, in which civil rights are threatened and violated.

In all cases, unpopular individuals and groups are supressed by the state. Dominant popular positions are not suppressed and do not require special interventions of civil-rights protection.


These Ontario events occur in a background where the American Civil Liberties Union (ACLU) is under attack for defending the civil rights of white nationalists, and where Manitoba politician Steve Ashton has recently called for a bill to criminalize “racist and homophobic slurs”, thus bringing us full-circle back into the Middle Ages when governments and powerful individuals could prosecute insults.

The OCLA calls on the government and corporate media not to act so as to degrade civil rights, and instead to recognize that strong civil rights are a necessary condition for democratic social contracting.

The OCLA calls on public intellectuals to resist an emerging pseudoscience of “a scientific basis for hate”, as a eugenics-like artifice in the service of state oppression and disastrous social engineering.

[2] The media was silent on relevant international civil rights law: “Laws that penalize the expression of opinions about historical facts are incompatible with the obligations that the Covenant imposes on States parties in relation to the respect for freedom of opinion and expression. (116) The Covenant does not permit general prohibition of expressions of an erroneous opinion or an incorrect interpretation of past events. Restrictions on the right of freedom of opinion should never be imposed and, with regard to freedom of expression, they should not go beyond what is permitted in paragraph 3 or required under article 20.” – General comment No. 34, International Covenant on Civil and Political Rights, Human Rights Committee, 102nd session, CCPR/C/GC/34, http://www2.ohchr.org/english/bodies/hrc/docs/gc34.pdf , para. 49

The X-PHOBIA CATASTROPHE must be reversed


Beyond a simple political-correctness meltdown, North American society is in the midst of an X-phobia catastrophe.


North America is following a RECIPE FOR SOCIETAL DISASTER: Let governments, institutions, and special-interest lobbies make the definitions of racism, antisemitism, misogyny, X-phobia... as broad as possible and then prosecute everyone for expressed-opinion and inferred-belief violations and sentence them to economic and social exclusion in as many areas of activity as possible.


SOLUTION: Actual freedom of expression with strong protections against the punishing governments, institutions, and special-interest lobbies.

Racism of personal opinion is not a crime. Inferred individual character inadequacies must not be punished by governments and their enabled institutions and corporations.

Instead, concentrate on the physical racism-etc of governments and their enabled institutions and corporations, such as war, genocide, economic apartheid, class-based persecution... Work for more actual democracy, not more societal exclusion and apartheids.

ISRAEL: The whole "criticism of Israel is antisemitism" circus is a textbook example of how a powerful, stratified, funded, organized special-interest lobby (Israel lobby, promoting Israel as the main Middle East foreign-policy enforcer of the USA-allied system) generates propriety crimes to be used against political organizers (BDS) and opinion leaders.

SEPARATION BETWEEN WORK AND PERSON


The rule regarding employer information-mining of social media should be strict. None of it should be allowed.

Tenure or no tenure, full-time or part-time, boss or shop-floor... no one in any employment should ever lose his/her job for any views expressed as a person (as opposed to spokesperson).

The employer should have an onus to satisfy a high threshold that the employee failed in his/her work duties and has refused or was unable to correct the deficiency, without the employer being allowed any reliance on ideological or character inference from social-media communications. Period.

Otherwise, we live in a totalitarian state that can remove livelihood on the basis of political or personal thoughts and expressed views.

This is not complicated. There are no subtleties.

Corporate, government and private-company employers do not own the employees. Rather, they rent some services for specific tasks, whether physical or ideological tasks, and they are allowed to do so pursuant to government-enacted statutes. These statutes give the non-natural-person employer: legal rights, entity privileges, and responsibilities towards society. Their employees must be entitled to protection against use of personality-related information.

Posted by Denis Rancourt at 10:12 AM No comments:

Whether Trump or Obama: AIPAC houses (Congress, Senate) must be reined in

In the face of the reality of emerging Eurasia, seen on every front including the Middle East, the USA has two nonexclusive options:

Nice to see option-1 showing the top of its bald head every once in a while [1].

This had to happen: war with Iran would be a gamble that could end USA dominance in the Middle East.

The big boys of the real deep state needed to show themselves and clear out some of the Israel ideologues and war mongers.

The AIPAC houses (Congress, Senate) need to be reined in or the whole hegemony thing could seriously go to hell.

[1] "McMaster solidifies power at NSC — and supports Iran deal, sees Israel as occupier", By Philip Weiss, Mondoweiss, 2017-08-05, http://mondoweiss.net/2017/08/mcmaster-solidifies-supports/
Posted by Denis Rancourt at 7:48 AM No comments:

When does "antifa" become pro-totalitarian?

Their stance does not strike me as a sterling example of logical consistency.

I'm against Fascism if this means opposing the evident and fast-pace government-corporate march towards totalitarian control over individuals and free associations of individuals, not if it means mobbing and attacking individuals that express views and sentiments.

Working with the state to suppress individuals for their ideas and organizing is not anti-Fascism. It is an actuation of totalitarianism.

Words are not bullets and arguments are not anything like (blood letting, bone-breaking) physical aggression. Otherwise, things become irrational very quickly and the resulting chaos serves powerful elites that love us to fight.

Imagine if, instead, we all wanted actual democratic control of the government and institutions. Antifa, Right, Left, whatever... unite.

Posted by Denis Rancourt at 6:29 AM No comments: