This article accompanies a 2-hour public lecture I gave at the University of Ottawa on March 27, 2015, entitled "The science and geopolitics of climate change": VIDEO-LINK-Part-1, VIDEO-LINK-Part-2. The physics calculations of Earth's radiation balance described in Part-1 of the talk are from this paper: Rancourt, D.G., "Radiation physics constraints on global warming: CO2 increase has little effect", archive.org (3 December 2011). Links to my articles and interviews about climate are HERE.

The human animal has an instinct to identify potential dangers and to warn others. It is a built-in survival mechanism of any animal that lives in a group. And it is a strong and constant activity, re-enforced by environmental stressors.

This plays out on several time scales, from the immediate in the case of a potential physical assault, to the weekly in checking the weather forecast, to seasonal in preparing for winter, to life-long in planning for inevitable aging, to leaving good things for our grandchildren...

It is in our fiber to look ahead and to plan ahead, especially in the face of foreseeable or detected dangers.

The whole process can spin out of control when the danger is difficult to perceive yet could be lethal. Think of baboons who are on the lookout for a stalking lion. The slightest shadow movement can make them scream and run for the trees. It's a tense and highly volatile situation.

At this stage in our evolution we are faced with a pathological extension of our collective survival reflex, which is entirely fabricated by our high priests (government funded scientists and talking heads).

If these high priests were not here to tell us that the atmospheric concentration of the minor constituent CO2 is increasing, and that "global mean surface temperature" has increased by some 0.5 C in the last 100 years, then we would never know about these imperceptible causes of our certain eventual collective death as a species.

The priests explain that our certain extinction will occur from a rising sea level and changing regional climates. That these changes will cause mass migrations, ecosystem collapses, agricultural failures, famines, and disease. They also inform us that those who will suffer most are the most vulnerable inhabitants of the planet, as though this were a new feature of the effects of natural disasters.

Therefore, they urge, we must tax carbon emissions, apply cap and trade, and create a global carbon economy to limit CO2 in the atmosphere. And who better to coordinate it all than the World Bank, IMF, and such, given their stellar records in managing equitable development on this little rock. (Or is that economic enforcement of US regime supremacy?)

Forgive me for saying, but this all sounds rather nutso to me.

Nothing could be more like a religion than this crazy movement. We are expected to accept that an essential and growth-limiting plant nutrient (CO2: [1]) is a toxic pollutant, that the world will be destroyed because of our collective and intrinsic wickedness of emitting CO2, via floods no less.

Take a deep breath (exhale if you dare) and allow me to state a few facts that might help put things into perspective.

The planet has been teeming with life for billions of years. 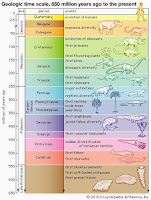 During that time, the global mean temperature has almost always been some 10 C higher than in the present geologic anomaly [2], in a manner uncorrelated with CO2 concentration [3]. That is the history of this same planet that we live on. During that time, the CO2 concentration has typically been 10 times higher than today's value, and it has rarely been as low as modern values, nor has it ever been lower than modern values.

There is no reason to believe that humans would not fare well on an Earth that is 10 C warmer, never mind 1 or 2 C. Land value would increase in the polar regions, and there would be intense reforestation and forest densification of the equatorial regions, with little possibility for controlling growth where it is hot and humid.

From what we know of our planet and the history of its biosphere, warming is not going to kill us off any time soon. None of the known mass extinctions (a relative term) in Earth's history can be reliably attributed to "sustained warming", whereas ice ages that have occurred recently (during human presence on the planet, in the last 1 M years) are expected to correspond to periods of decreased planetary life density, but saw mammals and human populations completely adapt. Basically, neither warming or cooling can kill us by any know mechanism ever observed. If anything, the opposite of "killer warmth" is observed on today's Earth, where both human populations and living biomass are concentrated near equatorial latitudes: 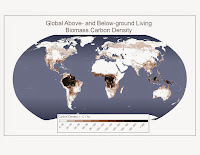 Therefore, we still have much time left to achieve human extinction by much more direct means than warming (or cooling) of any kind. We also have a lot of time and occasions to practice accommodating mass migrations caused by our wars and economic violence, in order to prepare for the "climate migrations".

Somehow there seems to be more public-opinion, political, and lobbying effort in implementing and developing the instruments of a global carbon economy than in developing the instruments to prevent wars of aggression, to cope with the consequences of natural disasters, to stop displacing and dispossessing local inhabitants, to enforce the Geneva Conventions, to stop the wholesale destruction of entire nations (Libya, Iraq, Afghanistan, Syria, Iran...?), to respect international law, ... not to mention reparations to the survivors of recent slavery, genocide, dispossession, and crass exploitation.

Rather than widespread vehement and actuated insistence on democratic control of local resources and institutions, based on individual realities on the ground, instead we have a sizable yet ineffective population of vocal do-gooders enthralled in spasmodic incantations against atmospheric CO2 emissions, as part of a Gaia-inspired religion perverted by the Christian concept of original sin; all of which de facto supports the carbon globalization schemes engineered by the US regime to attempt to constrain their emerging competitors and extort a development tax.

When has "globalization" ever been about justice, or about anything other than economic predation? When have good-will global efforts ever had any significant positive impact? [4]

Why pollute local struggles and liberation of the individual with tenuous claims about imperceptible dangers? And why put so much energy into insisting that the danger from CO2 is real? This seems like a classic example of seeking an overarching religious belief "solution" to real local problems that one cannot or will not confront.

"Climate justice" needs to be "justice". The comfortable-middle-class fetish for carbon co-opts the analysis, defuses the thrust for defending identity-tied interests, and sends legitimate demands straight into the atmosphere. Or, at best, it is simply irrelevant to real struggles.

In the main population, if all the fanatics that are screaming that the sky is falling would scream to stop the war machine that occupies every corner of the globe, then we could start moving away from the real manufactured disasters that wash over the planet continuously, which don't require satellite spectrometers to detect.

Instead of asking whether we can detect warming, whether intense weather events are actually more frequent, whether species extinction rates can reliably be measured, and so on, why not address the obvious: Humans are exploiting and terrorizing other humans, human conditions are constantly being attacked, and natural habitat is being destroyed for corporate benefit by eliminating local sovereignty.

Why turn to sanitized and intractable up-in-the-air questions when injustice and actual destruction is all around us? And why oh why pretend that humans can manage global carbon fluxes, manage the radiation balance of the planet, and control climate?

If we are going to have a global religion, why not believe that justice leads to both short-term and long-term safety? Not justice that is planned and given to us, but justice that we acquire through struggle and liberation.

On the other hand if you must be irrelevant and must have your carbon fetish, then at least put it into a planetary perspective [5]:


Dr. Denis G. Rancourt is a former tenured and Full Professor of physics at the University of Ottawa, Canada. He is known for his applications of physics education research (TVO Interview). He has published over 100 articles in leading scientific journals, including in the area of environmental science, and has written several social commentary essays. He is the author of the book Hierarchy and Free Expression in the Fight Against Racism.

Posted by Denis Rancourt at 9:33 PM

I totally agree. The "climate debate" as such is a giant canard and a distraction from real issues. While Rome burns and the barbarians pound at the gates, the senate debates irrelevant and fictitious minutia, in a senile attempt to maintain its forlorn grip on power.

In the absence of genuine debate and the will to take action comes religions and myths designed to absorb human energies.

Hi Dennis, Have you done any work on Energy returned on Energy invested,, I am a Monetary reformer and anti usury advocate and think that Energy questions are hugely important, CO2 is such a trivial distraction to very important issues as I know you are aware. EROI is a field in which I think the platform is wide open to tackling the Stae and Capitalist forces pushing the strange agenda of finance State monopoly capitalism.
http://letthemconfectsweeterlies.blogspot.se/2017/08/renewableseroi-why-money-doesnt-cut-it.html
http://letthemconfectsweeterlies.blogspot.se/2017/08/stciking-it-to-dismal-science.html

Hi Roger Lewis:
Yes, here is a tentative exploration of your question that I made: