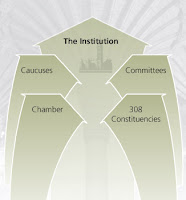 The professionals who run all institutions are embedded into the overarching societal dominance hierarchy and must serve this master in order to maintain their status and relative privileges. Despite the solemn institutional mission-statement verbiage, therefore, these professionals know -- for their own good -- who they really serve.

As a result, the institutions grow and develop policies, practices and structures that monotonously sharpen and perfect the hierarchical pyramid.

The illusory "foundational principles" of institutions are merely the comforting promises which deceive subjects into abandoning autonomy in favour of accepting paternalistic management, and hierarchical control.

In advancing hierarchy (corporate fascism) the institutions necessarily erode the appearance of their own needed illusory "foundational principles" and must hide this erosion with ever more complicated or obtuse verbiage and ever more detailed and convoluted policies and rules; in exercises of sophistry that equal the most awe-inspiring human achievements (e.g., read Supreme Court rulings and note what is not said).

The subjects must be "educated" to receive this sophistry as high expert knowledge, even as the "foundational principles" telescopically disappear in the face of reality.

In this way, the institutions (education, justice, health, finance, war, etc.) work together -- in a highly coordinated fashion -- to optimally support the dominance hierarchy. Jurisdictions are established, sequences of treatment enacted, etc.

The entire excise of law-making is an exercise in institution management and optimization to best serve and advantage the top strata of the dominance hierarchy.

And then, every once in a while, when circumstances in the bottom strata get too tense and the subjects start to see beyond the verbiage and expert management, things heat up and there may be adjustments, even re-normalizations, and we start somewhat refreshed, with clarified mission statements and so on.

And, following this jog or even back-step, "progress" can once again be pursued.

Such is the dance of institutional change as I see it.

The above theory of institutional change is predictive.

For example, since the institution's "foundational principles" pronouncements are a description of falsely promised repairs to damage necessarily caused by the dominance hierarchy and since the institution truly functions to support the dominance hierarchy, it follows that an institution will always work to distance itself from its own "foundational principles" and, where the stated "principles" give rise to strongly expressed expectations among the objectified subjects [1], to weaken ("re-define", "improve", "modernize", "clarify") its mission promises to the extent that it can.

The institution, therefore, works exactly to oppose its own "foundational principles" or purpose or mission statements because these statements are an expression of the targeted systemic consequences of hierarchy that the particular institution is meant to neutralize by subterfuge. The institution as substitute parent acknowledges the injustice, reassuringly states that the harm will be repaired via a fair (although complex) process, and sends the victim of hierarchy down a road with no issue; thereby cooling the mark out [2], causing the victim to invest in the false solution, and dissipating the complaint.

Another predicted consequence is that, for many individual professionals who work in institutions, there will be an unresolved dichotomy between elements of the individual's formal education regarding the benevolence of institutions and the dominant professional training culture of kissing ass to serve hierarchy and one's career "advancement." This, in turn, gives rise to the phenomenon of whistleblowers and their persecution and, depending on the degree of social integration of the professional culture, to the phenomenon of professional worker malaise [3]. Otherwise, cynicism and peer-group-identification are major outlets [3].

[This article was inspired by the incredible November 7, 2011, Final Order PO-3009-F of the Information and Privacy Commissioner, Ontario; that I plan to critique soon.] [HERE is the critique.]

[a] See this essay about the reality of the dominance hierarchy: Rancourt, Denis G. "Anti-smoking culture is harmful to health: On the truth problem of public health management." 2011.

[3] Schmidt, Jeff. "Disciplined Minds: A critical look at salaried professionals and the soul-battering system that shapes their lives." 2000.

Other essays by Denis G. Rancourt
Posted by Denis Rancourt at 5:02 PM

The four last paragraphs about predictions of the theory were added on November 12, 2011.

"The illusory "foundational principles" of institutions are merely the comforting promises which deceive subjects into abandoning autonomy in favour of accepting paternalistic management, and hierarchical control."

In America, we call this the U.S. Constitution.

"Social sciences research has begun to illuminate how norms and cultures, as well as legal, political, economic, and social institutions, affect freedom and prosperity, but our understanding of how and why these institutions change remains meager."