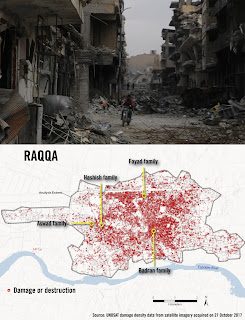 The Amnesty International report of June 5, 2018,


presents undeniable evidence of USA criminal disregard for civilian life, on a mass scale, in a populated city, and calls for official investigations leading to war crimes prosecutions.

The Report is an administrative description of USA evil deeds, performed under a cover of media silence and war propaganda at home.

The disregard for human life and urban installations on such a scale, under questionable pretext, while illegally attacking a sovereign nation, is as criminal as war crimes get.

The USA has no legitimacy in its proxy war for regime change in Syria.


Here are excerpts from the June 2018 70-page Amnesty International Report:

Amnesty International researchers travelled to Raqqa in February 2018 and spent two weeks visiting 42 locations of strikes and interviewing 112 witnesses and survivors. The organisation analysed satellite imagery and reviewed other publicly available material. This report documents the experiences of four families whose cases are emblematic of wider patterns.

The cases provide prima facie evidence that several Coalition attacks which killed and injured civilians violated international humanitarian law. ... Coalition forces did not take adequate account of civilians present in the city and failed to take the precautions necessary to minimise harm to civilians and civilian objects. ...

To date, the Coalition has not explained why it continued to launch strikes which killed so many civilians while a deal granting IS fighters impunity and safe passage out of the city was being considered and negotiated. Many survivors of Coalition strikes interviewed by Amnesty International asked why Coalition forces needed to destroy an entire city and kill so many civilians with bombardments supposedly targeting IS fighters – only to then allow IS fighters to leave the city unharmed. ...

In all the cases detailed in this report, Coalition forces launched air strikes on buildings full of civilians using wide-area effect munitions, which could be expected to destroy the buildings. In all four cases, the civilians killed and injured in the attacks, including many women and children, had been staying in the buildings for long periods prior to the strikes. Had Coalition forces conducted rigorous surveillance prior to the strikes, they would have been aware of their presence. Amnesty International found no information indicating that IS fighters were present in the buildings when they were hit and survivors and witnesses to these strikes were not aware of IS fighters in the vicinity of the houses at the time of the strikes. Even had IS fighters been present, it would not have justified the targeting of these civilian dwellings with munitions expected to cause such extensive destruction.

The Coalition has so far refused to even acknowledge the scale of harm caused to civilians by the military campaign. At the height of the Raqqa battle, in September 2017, outgoing Coalition commander, Lieutenant General Stephen Townsend, wrote that “…there has never been a more precise air campaign in the history of armed conflict”. However, this precise air campaign killed hundreds of civilians. At the same time, US Marines’ activities described by Army Sergeant Major John Wayne Troxell (senior enlisted adviser to the Chairman of the Joint Chiefs of Staff), suggests that the Coalition operation was far from precise: “In five months they fired 30,000 artillery rounds on ISIS targets… They fired more rounds in five months in Raqqa, Syria, than any other Marine artillery battalion, or any Marine or Army battalion, since the Vietnam War.”

Given that standard artillery shells fired from an M777 howitzer have an average margin of error of over 100m, launching so many of these shells into a city where civilians were trapped in every neighbourhood posed an unacceptable risk to civilians. Yet despite incontrovertible evidence of civilian casualties and wholesale destruction in Raqqa, and the high level of civilian casualties, the Coalition narrative remains unchanged.

The international Coalition [allegedly] to defeat IS in Iraq and Syria was formed in 2014. Named “Operation Inherent Resolve”, it sought to present itself as an international Coalition with broad-based support from nations and institutions around the world. But the military action it took in Raqqa against IS was an overwhelmingly US military affair. Under the command of a US General, US forces fired 100% of the artillery into Raqqa and carried out over 90% of the air strikes. British and French forces were the only other Coalition members to strike Raqqa from the air. ...

Eight months after military operation ended, most of the city’s residents remain displaced and those who have returned are living in dire conditions among the mountains of rubble and the stench of dead bodies trapped beneath, facing the threat of mines/improvised explosive devices (IEDs) and unexploded ordnance. Virtually every resident of Raqqa who spoke to Amnesty International asked why those who could spend so much for a costly military campaign to destroy the city cannot provide the relief so desperately needed in its aftermath, including the heavy-lifting equipment needed to clear the rubble and recover the bodies and clear the IEDs.

Posted by Denis Rancourt at 2:04 PM