This article was first published in the July 1, 2018 issue of the Ontario Landowners Association:

Basically, a small neighbourhood in Ottawa is being devastated by large three-storey multi-unit buildings being built next to family homes, sometimes encasing and isolating a given home or small cluster of homes. The general bylaw prohibits three-story buildings on the small lot sizes. The City’s Committee of Adjustment is allowing this abuse by improperly using a loop-hole in the law. The Committee has virtually always decided that erecting a different species of building onto too small a lot size constitutes a “minor variance” from the bylaw. On the contrary, the bylaw is intended to protect residents from exactly this type of de facto expropriation. ...

Here is the article:


I’m a volunteer researcher for the Ontario Civil Liberties Association (ocla.ca) and I have seen many non-stop government violations of individual rights in several arenas but recently I got a front-row seat at the violations of my own landowner rights.

I fought them and won. This is how I did it.

Landowner rights are two-sided: You have a right to use your property. And you have a right not to be subjected to undue nuisance from other landowner’s uses of their property. The latter is the so-called nuisance tort of common law.

In an urban or community environment, the municipality or city in addition is given statutory rights intended to optimize service provision and to minimize conflicting ambitions. The resulting creatures are called zoning bylaws, which are enforced by police powers.

Virtually all the problems arise at the boundaries between lots and between differently zoned areas, where owners on either side of the boundaries have different designs.

Badly zoned residential areas allow multiple and changing problem boundaries between lots, where constant impositions are forced on established residents by changing uses of lots. This can in-effect amount to forced expropriation out of one’s residential neighbourhood that historically had a definite character and lifestyle culture.

My own neighbourhood of Old Ottawa East (formerly Archville, which was incorporated as the village of Ottawa East in 1888 and in 1907 was amalgamated with the growing community of Ottawa) is particularly bad in this regard. The bylaw zoning allows both single-family dwellings to co-exist with rental multi-unit four-floor-level buildings. And it allows single-family dwellings to be demolished and replaced with such multi-unit buildings.

This is what that looks like for my neighbour at 39 Chestnut Avenue (the small white house): 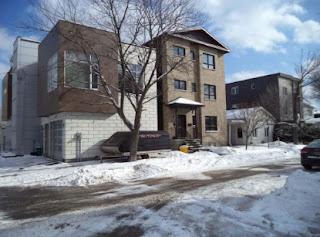 My neighbour is in a wheelchair and her house was adapted for her at great expense. She is now suddenly surrounded by noisy air-conditioning units, shade-casting buildings, privacy-vitiating high windows, and many near-proximity noisy neighbours. She opposed the out-of-character developments but the Committee of Adjustment (“Committee”) and the Ontario Municipal Board (“Board”), in their infinite wisdom, decided that the developments were “minor variances” and were “desirable for the appropriate development”.

In my own recent case, my wonderful immediate neighbour died of cancer and her husband moved to a managed home. They owned two lots because the second was a large vegetable garden and a utility building. They supplied their extended family and many neighbours with tons of vegetables.

The developer who bought the two lots made applications to sever the lots into three and so-called “minor variance” applications to build a large two-unit three-story building and a large single-unit home. Full-lot-footprint affairs.

This would have had deleterious effects on my family’s enjoyment of our property.

It was the beginning of my crash course in the corrupt practice of “minor variances” in Ontario. I was to learn that the minor variance provision (s. 45(1)) of the Planning Act is unconstitutional, and that both the Committee and the Board most-often do not have jurisdiction to approve variances.

I also learned that Ontario is the only province in Canada whose bylaw-variance provision in its planning act sets a jurisdictional threshold as “minor variance”, without defining “minor” and without providing the established criteria of undue harm from compliance with the bylaw and absence of injury to neighbouring properties.

I talked to many people and decided, with my wife’s permission and support, to make full legal arguments against the applications. I’m not a lawyer but I have made constitutional arguments before in the courts.

The staff of the Committee and of the Board were professional, competent and helpful, a nice change compared to Ontario courts!

I was shocked by the Committee at its hearing of my challenge because it did things that no administrative tribunal in Canada is supposed to do:

These statements by the Chair of the Committee, Helena Prockiw, are equivalent to deciding that the constitution and the Charter do not apply in a committee of adjustment hearing and that, unlike with the mere Supreme Court of Canada, the jurisdiction of the Committee cannot be challenged.

I expressed my dismay to no avail.

Only one out of five Committee members opposed the variance applications, even though a strict interim control bylaw was in force that was grossly violated, in addition to the general bylaw.

I then filed a notice of appeal to the Board. The developer hired two lawyers from a large law firm and lined up an expert witness. The partner at the firm in an email to me said: “We are of the preliminary view that your constitutional argument is not properly brought to the OMB, but should be the subject matter of a court Application. You may wish to research this before filing your notices.”

That is plain wrong and is echoed by City lawyers. So you have to be careful.

My Notice of Constitutional Question prompted the City to request standing to intervene at the Board on the constitutional question. The Board in-effect granted this and I advised that I did not object.

Next I served and filed my full legal argument, with much of my evidence and a description of what my main expert witness would say. I also sent it to the Attorney Generals and to the City’s lawyer. The 53-page document is posted on the OCLA web site here:

It tells the full story in evidence and lays out the legal arguments.

Here are all my legal arguments, in notice of appeal format:

>>>>Unconstitutionality and Violation of Charter rights

Section 45(1) of the Planning Act (henceforth, the Act) is unconstitutional because in-effect it infringes or denies the complainant’s s. 15(1) Charter right of equal protection and equal benefit of the law without discrimination:

(b) The residents living near the applicant’s land are denied the full protection and benefit of the zoning bylaw whereas other residents are not.

In the alternative, the complainant is discriminated against as an ordinary resident of a dwelling, acting in personal interest to protect his living environment, compared to a non-resident developer acting with a business interest.

The said discrimination is established in the body of the decisions made by the Committee to grant the requested relief from the bylaws. It is quantitative and palpable, and is thus not saved by a s. 1 Oakes analysis. It is not prescribed by law nor demonstrably justified in a free and democratic society.

The Committee refused to hear or consider the appellant’s constitutional argument. On the contrary, the Supreme Court has been clear that constitutional challenges should be heard by the administrative tribunal (hence the Committee, and now the Board): Cooper v. Canada, 1996 CanLII 152 (SCC), [1996] 3 S.C.R. 854.

>>>>Constitutional vagueness of the Planning Act

Section 45(1) of the Act is unconstitutionally vague, in that it does not establish transparent boundaries for the domain of jurisdiction of the Committee to authorize variances from the provisions of the by-laws in effect (in this case the Interim Control Bylaw 2017-245 and the Zoning Bylaw 2008-250).

The doctrine against vagueness in the laws is founded on two rationales: a law must provide fair notice to citizens and it must limit enforcement discretion, e.g.: R. v. Nova Scotia Pharmaceutical Society, [1992] 2 SCR 606, 1992 CanLII 72 (SCC).

The historical jurisprudence of allowing minor variances is to admit the difficulty of imposing codified bylaw conditions on the complexities of real land-use circumstances.

Any jurisdictional question must be answered both objectively and correctly; it is not a matter of discretion; however the Act does not provide a definition of or a test for the jurisdictional threshold expressed as “minor”. Therefore s. 45(1) of the Act is unconstitutionally vague. In the alternative, if the impugned provision is not constitutionally vague (which is denied), then the meaning of “minor” must be taken from the common-law jurisprudence, not solely from Ontario case law that has developed in a statutory context in which a test for “minor” is not specified.

>>>> The variances are not desirable for appropriate development

In the alternative, if s. 45(1) of the Planning Act is constitutional (which is denied) and if the Tribunal has jurisdiction (which is denied), then the applications should be denied because the applied-for variances are not desirable for the appropriate development of the lots:

There are unacceptable and easily avoidable deleterious effects for the neighbours in this established community.
There are unanswered and proven concerns of soil toxicity and public health, without a city plan to prevent health risk.

The following are some particulars in this regard. [And so on…]


Within hours, the applicant (developer) had abandoned all his applications and suggested that the hearing was not necessary.

He implemented a plan B and is now building two single-unit homes on the two original lots. He has been respectful, responsible and responsive to the community in the on-going building process.

I responded that I was willing to proceed with the constitutional questions, which I argued were not moot.

Within days, the Board released its formal order that the applications are denied for the reason that the applicant advised he would not make submissions. The matter of the appeal is closed.

However, the minor variance provision of the Planning Act remains unconstitutional and continues to be misused. It is unlawfully a planning instrument that gives the tribunals virtually unlimited discretion. Also, the general bylaw must be changed.

I’m helping neighbours and the community association to continue the battle, and some have adopted my legal arguments.

Recently, zoning law procedures have been overhauled in Ontario. The Board has been replaced by a “Local Planning Appeal Tribunal”. But, unfortunately, the “minor variance” statute provision and the legal culture in Ontario have not changed. Appeals of minor variance decisions are run essentially the same way as before. I will witness the procedural differences soon. I hope that things have not been made worst for ordinary landowners and residents.
Posted by Denis Rancourt at 6:22 AM