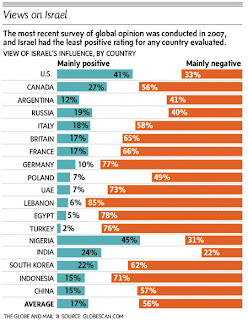 “This is the kind of obviousness that a child can see—though the child may, later in life, become browbeaten into believing that the obvious problems are "non-problems", to be argued into nonexistence by careful reasoning and clever choices of definition.”
-- Roger Penrose

“... so obvious that it takes really impressive discipline to miss it ...”
-- Noam Chomsky


Here we have Israel as an internationally recognized thug, keeper of the largest open-air prison on earth, regularly practicing war crimes against civilians, targeting civilian infrastructure and continuously disregarding the Geneva Conventions – virtually unanimously denounced by the international community, by every human rights watch group on the globe, and by international civil society for the last many decades [1] – and how do Canadian politicians and parliamentarians respond?

Israel has no significant economic exchanges with Canada [a] and performs no significant geopolitical service of benefit to Canada; a Canada with virtually no economic ties with the Middle East and a Canada that is a net exporter of oil and gas.

Yet, apart from the independent-thinking Bloc Quebecois, it seems that half the time that English Canadian politicians open their mouths it’s to denounce a “new anti-Semitism” that social scientists and statisticians tell us is a media fabrication or to express Israel’s “right to defend itself” or to declare Canada’s “unwavering support for Israel.” Not to mention Israel’s “right to exist”! [2]

What about unwavering support for human rights and international law?

And I count the NDP (New Democratic Party) establishment prepared to sacrifice one of its own for stating a historic fact and happy to stand silent in the face of Zio-zeal.

The Canadian Zionism Question is: Why?

How do English Canada politicians benefit from being subservient to US geopolitical doctrine? Or how would they suffer from not trading away Canada’s sovereignty; and how are most Quebec politicians immune?

Would it be so difficult for English Canada politicians to not so enthusiastically kiss the ass of the Middle East tyrant? And not adopt unanimous parliamentary resolutions to suppress criticism of Israel on university campuses? And not spend valuable parliamentary resources “investigating” imagined new anti-Semitism in Canada?

How in God’s name can we understand this new madness?

What happened? Sure there was CanWest but it died, despite the government’s best efforts to covertly bail it out.

What is going on?

Some prominent cover-up artists have suggested that English Canada politicians are overly preoccupied with pleasing Jewish voters. But there just aren’t enough Jewish voters to explain transforming the Parliament into the embarrassing Zio-zeal fest that it has become, in the face of an opposing world consensus view. In addition there are growing numbers of Jewish Canadians who are critical of Israel and of Canada’s uncritical support for Israel and its policies. [3]

Given the overwhelming evidence for the Zio-zeal phenomenon and given its obvious sovereignty implications, it seems fair to ask the Canadian Zionism Question: Why?

There are at least two categories of possible answers: One that involves the obedience of service intellectuals and political caretakers and a related one that involves “following the money”. There is also of course the always useful appeal to mythology:

“And then, you know, there's the obvious one - you love someone so much that you would do anything to spend all of eternity with them.”
-- The Vampire Diaries (TV series)


Is not the Zionism Question a worthy research question – brimming with societal implications – for tenured university professors? Or is everyone afraid of Stanley Fish and his crasser cohorts? Hey, those goons are in the US – remember?

[a] Background on the question of Israel's economy: http://dissidentvoice.org/2011/02/israeli-economy-for-beginners/#more-29116
[1] See the work of Norman Finkelstein: http://www.normanfinkelstein.com/
[2] “On Israel's 'Right to Exist' and on Racism” by Denis G. Rancourt, Palestine Chronicle, June 30, 2010: http://palestinechronicle.com/view_article_details.php?id=16096
[3] e.g. Independent Jewish Voices (Canada): http://www.independentjewishvoices.ca/
[4] 2007 global opinion survey, as reported in “For Israel, every traveller is an ambassador” by Patrick Martin, Globe and Mail, February 23, 2010.

Denis G. Rancourt was a tenured and full professor of physics at the University of Ottawa in Canada. He practiced several areas of science which were funded by a national agency and ran an internationally recognized laboratory. He published over 100 articles in leading scientific journals. He developed popular activism courses and was an outspoken critic of the university administration and a defender of student and Palestinian rights. He was fired for his dissidence in 2009 by a president who is a staunch supporter of Israeli policy. [See rancourt.academicfreedom.ca]
FOLLOW UP:

This article has been reposted on several news blogs and discussion sites. As a result several tentative answers (research directions) have been suggested. Here is a sample list, with additions:

Note that the suggested academic research would be aimed at identifying and describing the actual dominant psycho-social mechanisms operating on individual politicians to give rise to Zio-zeal. The research would further quantify the relative importance of concomitant influences. A powerful research approach would be to obtain research interviews with politicians and/or their aids and advisers.

In particular, there are many informative comments and important links in the COMMENTS section here: Dissident Voices.
Posted by Denis Rancourt at 7:30 AM

Maybe the author can elaborate on his NDP criticism. I'm not sure what incident he was referring to.

I think the criticism is about when "Harper accused Libby Davies, Member of Parliament for the New Democratic Party (NDP), of making “extremist” statements because she gave halting support to the BDS campaign and said Israel had been occupying Palestinian territories since 1948. Demanding Davies be fired as the NDP’s deputy leader, Harper told the House of Commons, “She made statements that could have been made by Hamas, Hizballah,” which Canada considers terrorist organizations."
Link: http://yvesengler.com/2010/08/20/is-canada-passing-information-on-its-citizens-to-israel/