On the theory of a middle-class war for justice 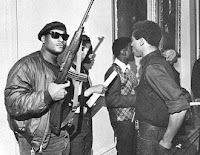 
Activists in the First World middle-class need to get real.

They are an avant-garde minority against a police state. Given their small number and given the relatively low degree of state violence directed at them, there is no point practicing armed urban guerrilla tactics unless the activists become targeted themselves by COINTELPRO-style executions.

Would the Black Panthers and their breakfast programs have survived if they had an organized covert counter assassination unit which killed cops in answer to every state assassination or abduction? There are way more black folks than cops in the US: Less than 2% (0.7M vs. 40M today) and the cops are busy with lots of stuff.

As long as the State refrains from summary executions of political dissidents there is no practical reason to practice armed guerrilla warfare; in view of the State’s predictable response which would be supported by a majority of the middle-class.

One can argue that the racist large scale prison attack against the lower economic class in the US is violent to the extent of justifying an armed guerrilla response but this response is primarily the self-defence responsibility of the targeted lower economic class and middle-class activists are not about to participate in large numbers.

Middle-class activists should concentrate on fighting their own oppressions using the methods to which they have access. These methods go far beyond petitions, letters to members of parliament, letters to the media, street protests, and one-day occupations of government facilities.

The State has assembled a large-scale anti-democracy apparatus which targets middle-class political dissidents. The State apparatus practices extensive surveillance and infiltration, pre-emptive arrests, intimidation of activists and their friends and family, police harassment, targeted and exaggerated or false criminal prosecutions, unconstitutional bail and undertaking conditions, and so on. [a]

Unfortunately, too many middle-class activists who fall prey to these state abuses of power are intimidated away from defending themselves and away from effective activism. Every such successful intimidation is a soul-breaker. The activist makes the demoralizing choice of accepting defeat and imposed conditions in exchange for a compromised political existence.

These humiliating defeats are not necessary. Rebel means rebel.

Framed Black Panther activist Assata Shakur, defending herself from prison against fabricated bank robbery charges in 1976 in the US put it this way:

“The trial had a lighthearted feel to it. Everyone had kind of decided that we would enjoy the fight and fight as hard as we could, without worrying about whether we were gonna win or lose. … The atmosphere was electric. The kourtroom was packed every day with sisters and brothers who had come to watch the circus. ... One little girl broke up the whole kourtroom when she asked out loud, ‘Is that the fascist pig, Mommy?’ pointing up at the judge...”

Shakur was acquitted. After she was later found guilty in 1977 of the fabricated charge of killing a cop in an ambush of several colleagues in which she almost died, Shakur escaped to Cuba from a maximum security jail.

In 1953 Fidel Castro self-represented himself before a kangaroo court that sentenced him to life. In his famous and lengthy “History Will Absolve Me” closing arguments he uncompromisingly put it this way:

“As attorney [I have] not even been able to take a look at the indictment. As accused, for the past seventy-six days [I have] been locked away in solitary confinement, held totally and absolutely incommunicado, in violation of every human and legal right. ... only one who has been so deeply wounded, who has seen his country so forsaken and its justice trampled so, can speak at a moment like this with words that spring from the blood of his heart and the truth of his very gut. ... If all the weight of the law does not fall upon the guilty because of cowardice or because of domination of the courts, and if then all the judges do not resign, I pity your honor. And I regret the unprecedented shame that will fall upon the Judicial Power.

I know that imprisonment will be harder for me than it has ever been for anyone, filled with cowardly threats and hideous cruelty. But I do not fear prison, as I do not fear the fury of the miserable tyrant who took the lives of 70 of my comrades. Condemn me. It does not matter. History will absolve me.”

Castro spoke the truth as he saw it, irrespective of the consequences, without any illusion about the nature of the kourt.

I’m suggesting that First World activists should fully and without compromise engage society via the institutions that oppress them: the kourts, the skhools, the workplace, the prisons, the hospitals, the associations, the unions, the ministries, the societies, the departments, and so on.

These institutions are tied to middle-class and upper-class self-image and this cultural identity tie makes their rules less malleable than power would like, especially when the battle is done publicly – with the full transparency of internet accessibility. [b][c]

In addition, such battles against societal institutions are “news worthy” because power must pay attention to them. The same institutions that exercise oppressive controls over people can also be used to expose power and constrain it, thereby making space for increasing dissidence. Media coverage, in turn, whether good or bad, helps to raise public consciousness and contributes to changing the culture of passivity.

I’m suggesting that middle-class activists put their educations to work and defend themselves without compromise using their privileged ties to upper-class sensitivities by taking on the institutions precisely when and where the institutions are personally oppressive against the individual activists.

Each instance of oppression is an opportunity, an open door for one’s Trojan horse. They don’t expect you to be non-compromising, nor do they expect you to have your own voice, to represent yourself without the buffer of a trained (and therefore almost always compromised) lawyer. [d]

Welcome to praxis if you go there. Freire’s mantra is that you can only fight your own oppression. And this is what it means; from your position of power in society and to maximum impact. [1][2]

Learn the law and do it yourself. Use lawyers as consultants but stay in charge. You are not minimizing risk to the client; you are reshaping society to make space for more justice.

Make every battle a learning experience. Don’t repeat tactics that don’t work. Don’t evaluate “success” wearing fairytale glasses. Rampage as far as you can go. Fight to win irrespective of the odds and enjoy the fight!

You have to enjoy the fight because they can’t kill you. You are middle-class. Connect up and make it work. Experience liberation.

[This essay is dedicated to the memory of David F. Noble [3].]
Posted by Denis Rancourt at 6:59 PM

Niether Free Nor for Sale said...

Looking back over 25 yrars of near constant battles, constnt skirmises, constant conflict: at Uni as a graduating student, they debated failing me copletley for they were full of hatred for what I wrote and the head of the Philosphy department said 'As an undergraduate, you're not suppoed to think', so I left academia behind and then every sphere I have worked in, I have found some form of wrongdoing, corruption abuse of power, which I have tried to address and got disciplined, got threatened, got sent to Coventry, and after being dismissed form one college, I suddenly got dismissed from the university position within two weeks...

Your article here haa provided a much needed (ok, full confession - desperately needed : ) ray light on what is wrong with me!

Why is that my peace women copatriots/feminists/muslims/socialist/academics/teaching fellows/even Quakers and even my siblings, have come to a point in their relationship with me, where they feel so uncomfortable, they go from eyes averted, to no visits, to no calls and then on to to total abandonment of me?

I go over my conduct... I have never raised my voice, I never did swear, I never betrayed a confidence of theirs... I never hit anyone.... I always cooked nice meals and... in fact... the worst thing I ever did which was a sure harm, was to use a humane trap for catching a mouse. But this mouse seemed to wise up to my cunning plan and over three days there was no sign of it... so I forgot all about this humane mouse trap and went away for a week or so... I came back to find a shrivelled up corspe of a tiny mouse... and did i feel sick! It had died of thirst and hunger and still I feel terrible about it... But did I ever harm a human? I really don't think so. Not deliberately anyway.

As I finally call my ex employers to account, where are my colleagues wo shared my concerns about the poor treatment meted out to students? Erm... They are going on holiday and have no tiie to give witness statements for now... There is the mountain of lies and here I must sit and reply to each one...lies by management, and no money with which to hire a lawyer while the other side have got a top-notch firm plus unlimited resources...

This article is like manna form heaven in its explanatory clarity and more nourishing than a tender kiss.

THANK YOU Prof Denis Rancourt, you are a marvel for your exmple of intellectual rigour, stylistic clarity and that rarest of rare flowerings, moral integrity in the face of such lengthy and such vicious machinations against you.

How do you keep up your morale?

Take care and may you long flourish!

I need to verify that you are real and not just a tunneling shadow from a parallel universe.

Please contact me for the needed reality check at my blogger email:
claude.cde [at] gmail [dot] com.

And thank you for expressing your discovery!