Symbiosis of anarchy and hierarchy: Towards understanding the continuous revolution of liberation and the barrier that is the oppressor within 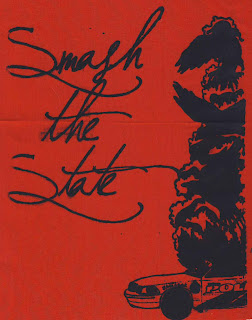 Or, if you can’t fucking cheer a burning cop car...

This is my reaction to the recent North American Anarchism Study Network conference held in Toronto, at which the divide between the study of anarchism and the practice of anarchy was made abundantly clear. An overview would bring one to the overly hasty conclusion that anarchy is dead. I found myself compelled to express that anarchists should celebrate acts of anarchy, at an anarchism conference!

We are born anarchists and we are born into hierarchy.

We have a built-in desire to make decisions that are good for our individual selves in all circumstances. This can lead us to want to cooperate, to want to rebel, to accept sacrifice for an anticipated greater good or future good, and to accept oppressive circumstances when we do not perceive a possibility of escaping these circumstances.

We seek to survive and to project ourselves within the limits of what we perceive to be achievable. Projection is both biological (reproductive, genetic) and political (influence, authority).

In making individual decisions, our perception is largely societal, in that it is modulated and defined by societal norms and the societal world view.

It is the overriding influence of society on individual perception that mostly keeps the individual embedded within society’s structure. Cracks in the mental environment allow dissidence and deviance – anarchy.

The seasons, the elements, and natural competitors have taught humans to foresee and guard against attacks and other threats to safety. More planning implies greater organization and specialization. Organization and specialization, if it is not constrained by non-exploitive tradition, can in turn become resiliently tied to gender, race, other human characteristics and affinity groups of conspiring profiteers to become class-defined hierarchy.

Hierarchy is a resilient structure of societal stratification that is maintained by force, rather than simply a form of societal organization consciously and willingly supported by free participants.

Control of the many by the few is achieved by socio-psychological methods (gangsterism, the risk of being mobbed, mythology, divide and conquer tactics, strategic control of key resources, and so on) and by one-sided use of the most advanced technology, in particular weapons technology.

The anarchist understands hierarchy as inherently oppressive and as necessarily violent. Here Paulo Freire’s definition of violence is particularly relevant [1]:

“Any situation in which “A” objectively exploits “B” or hinders his and her pursuit of self-affirmation as a responsible person is one of oppression. Such a situation in itself constitutes violence even when sweetened by false generosity; because it interferes with the individual’s ontological and historical vocation to be more fully human. With the establishment of a relationship of oppression, violence has already begun.”

“If people, as historical beings necessarily engaged with other people in a movement of inquiry, did not control that movement, it would be (and is) a violation of their humanity. Any situation in which some individuals prevent others from engaging in the process of inquiry is one of violence. The means used are not important; to alienate human beings from their own decision-making is to change them into objects.”

To not attack hierarchy for fear of the backlash, or to postpone attacking hierarchy in order to prepare for the backlash in a protracted avoidance period of “organizing”, is to not practice anarchy.

A praxis of liberation fighting one’s own oppression and driven by authentic rebellion is a sustainable practice of anarchy. In this model, the subject of liberation does not plan a definitive revolution but rather engages in a life of acquiring his/her freedom [1]:

“Freedom is acquired by conquest, not by gift. It must be pursued constantly and responsibly. Freedom is not an ideal located outside of man [woman]; nor is it an idea which becomes myth. It is rather the indispensable condition for the quest for human completion.”

“[Otherwise, the participants] aspire to revolution as a means of domination, rather than as a road to liberation.”

A revolution cannot lead to a post-revolutionary period with less hierarchy unless it is a revolution of dismantling hierarchy as part of the process of liberation. And this revolution can have ups and downs and accelerated moments; it can mesh, coalesce, fragment and more; but it is never complete, never done.

Anarchy will never run out of hierarchy.

In this view, we prioritize the process of liberation by fighting the oppressor over the severed distractions of “building alternatives”, “building community” and “organizing to resist”. The latter are seen as at best empty or superficial and at worst strengthening the oppressor’s presence within when not accompanied by a praxis of self-defence spirited by authentic rebellion. Only direct self-defence or push-back against oppression and towards liberation can produce dignity, true solidarity, and personal and communal emancipation.

We reject the isolationist and segregationist tendency to rationalize-out rebellion and its direct expressions. In this sense, we see the current rejections and qualifications of direct action as pathological pacifism [2]. We also understand any absence of or suppression of the instinct to celebrate all acts of anarchy as a deadly internalization of the oppressor.

We further reject the notion that visceral, vehement, and cathartic acts of anarchy are the hallmark of societal and political immaturity, a phase that it is healthy to grow out of by turning towards cooperative suppression and consensus-based imprisonment. Instead, the individual’s intensity of praxis can match the individual’s growing experience and stature; as opposed to accommodation of the oppressor within.

If you can’t fucking cheer at a burning cop car in a city replete with racist and classist police violence then you have seriously invested the oppressor within you; and likewise if you can’t celebrate targeted property damage against the main institutions of economic predation – G20 or no G20.

The whole idea of anarchy is that, although it can be coordinated and strategic within groups of consenting individuals, it is always within the grasp of the individual, it can spread spontaneously, and it is distributed. The anarchist does not need permission or approval from any community or societal group to enact anarchy in self-defence [3].

That the master will be pissed (or that the master’s media will give a bad image in the internalized masters’ eyes) is no reason for not practicing anarchy. The anarchist takes the risk of the backlash and makes the decision. That the master will punish others by association is primarily a matter for the others to consider. No informed bystanders are innocent.

References
[1] “Pedagogy of the oppressed” by Paulo Freire
[2] “Pacifism as pathology” by Ward Churchill
[3] Canadian Animal Liberation Movement Collective: Until every cage is empty...
Posted by Denis Rancourt at 6:07 PM

"If you can’t fucking cheer at a burning cop car in a city replete with racist and classist police violence then you have seriously invested the oppressor within you; and likewise if you can’t celebrate targeted property damage against the main institutions of economic predation – G20 or no G20."

But this is the false dichotomy we've been deliberately given to play with; what if, rather than cheering / not cheering the burning of a cop car, we consider such an action futile... and concentrate on less cathartic actions of greater tactical value?

Given our Cultural Programming, feeling "helpless" makes us feel "impotent", which compels us to assert our masculinity with boyish expressions of violence, no? I think it's a very old and deeply sexual trap.

Those "on top" enjoy the perverted, gratuitous violence of Caligula (eg, Rumsfeld's pleasure dome, Abu Ghraib, which was perfectly anticipated by Pasolini's Salo but the significance of which... as a window into the sexual sickness at the core of such power... was missed by most commentators); those on bottom can only react on a smaller scale and downward (ie, toward the even weaker or toward inanimate objects).

Why not take a step back from this dynamic...?