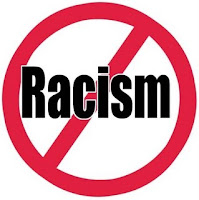 
I consider that there is a fundamental distinction to be made between (1) racism of belief or opinion of the individual and (2) racism of action (or inaction) in the systemic oppression of others.

There is an extensive and baseless sociological literature advancing that belief or opinion racism of the individual (on its own and largely independent of the hierarchical context) generates racist oppressions of peoples, all the way to genocide.

The latter proposal is used to advance the "obvious solution" that belief or opinion racism of the individual must be continuously eradicated using coercive methods including: propaganda, "education", the legal apparatus, and the state-NGO-civil-society anti-oppression complex.

In other words, the physical reality of dominance hierarchy oppression racism is supposedly "attacked at its root" by social engineering premised on attitude manipulation and a causal original sin within.

Agency and responsibility are turned away from attacking the racist dominance structure directly; by focusing on a false and ancillary "cause", by blaming the internal beliefs of some individuals instead of emphasizing the needed praxis of liberation of all individuals subjected to the dominance hierarchy.

What results is a classic divide and conquer where oppressed victims are divided by race, gender, etc., and where a hierarchy of the oppressions becomes the focus within each stratum of the dominance hierarchy instead of actual fighting back.

What results is that the slaves fight among themselves to ensure that they are oppressed fairly. There is a focus on defining and enforcing inter-slave rules instead of supporting rebellion.

What results is that each group in the hierarchy of the oppressions is further cantonized and embedded into its victimhood while insisting that the solution is for the "less" (or not) oppressed individuals to "recognize their privilege" and to change their ingrained oppressive behaviours.

Following Freire, I believe that the latter approach is a senseless tactic and a harmful diversion:

"[T]he oppressor, who is himself dehumanized because he dehumanizes others, is unable to lead this struggle. However, the oppressed ... are inhibited from waging the struggle for freedom so long as they feel incapable of running the risks it requires. ...

It is only the oppressed who, by freeing themselves, can free their oppressors. The latter, as an oppressive class, can free neither others nor themselves..."


The problem with disallowing all violence is that it removes violence as a means for self-defense against a violent attacker. To disallow the use of force is to support the oppressor who uses force by unjustly depriving the oppressed of an important instrument of self-defense.

Indeed, it is a natural instinct to learn to recognize dangerous animal species or predatory groups of the same species. Such "racism" is an essential survival reflex. Such an ingrained reflex is practiced and modified by culture. It is part of our humanity. Like violence, it is not in itself and out of context positive or negative. Only the objective circumstances that make racism or violence necessary or advantageous as part of self-defense are objectively negative.

Therefore, to attack belief or opinion racism rather than the oppressors who have created the circumstances for the development of racism is to substitute one effect of the dominance hierarchy for the cause. As a consequence one mostly avoids the necessary (and feared) confrontation against the oppressor.

The anti-racism of thought crime racism is a barrier to free expression and to the dialectic interactions that must occur within one's stratum of the dominance hierarchy, within each community. As long as there is the possibility between individuals to challenge, insult, verbally intimidate, attempt to convince, reason, seduce, influence, shame, expose, and so on, without significant objective consequences to physical safety and well-being and without resorting to mobbing then the conditions exist to build community. As soon as one appeals to organized coercion, irrespective of the grand principle being espoused, then one is representing and supporting the hierarchical oppressor and generating a new intra-stratum control structure.

All structures that stabilize and reinforce slave relations while masking or impeding the possibility of rebellion support slavery.

An activism centered on creating a "safe space" by the method of internal organization rather than by pushing out the invader is an activism that supports that all other spaces are not safe. And its "safe spaces" will never be safe or even feel safe.

"Pedagogy of the Oppressed" by Paulo Freire, 1970.

"Pacifism as Pathology" by Ward Churchill, 1998.

"How Nonviolence Protects The State" by Peter Gelderloos, 2007.

"On the racism and pathology of left progressive First-World activism" by Denis G. Rancourt, 2010.

"On the question of Israel’s “right to exist” and on Israel’s racism" by Denis G. Rancourt, 2010.

"Self-Image as Primary Concern and the Road to Good" by Denis G. Rancourt, 2010. (See endnote "NOTE on limits to free expression".)


Denis G. Rancourt is a former tenured and full professor of physics at the University of Ottawa in Canada. He practiced several areas of science (including physics and environmental science) which were funded by a national agency and ran an internationally recognized laboratory. He has published over 100 articles in leading scientific journals and several social commentary essays. He developed popular activism courses and was an outspoken critic of the university administration and a defender of student and Palestinian rights. He was fired for his dissidence in 2009. His dismissal case is scheduled to start court hearings in 2011.
Posted by Denis Rancourt at 6:53 AM

I don't suppose Freire would regard the American Civil war, with respect to the end of slavery, as an authentic revolution.

Mark Ames's book, Going Postal expresses the opinion that slave rebellions, prior to emancipation, were few and far between. When rebellions did occur it was to the puzzlement of many, including the slaves who were not involved. My understanding of Freire is that he would say that there was no praxis.

Consequently there was a hundred years or so of continuing racism where the specious 'reality' of racism was never challenged (by both the oppressor and oppressed) until the 1950s and 60s with the rise of black consciousness. In other words praxis began in the 50s and 60s.

That's my understanding of Freire, thus far. I may be (most likely will be) wrong, though.