Against diversity of tactics, in support of direct action 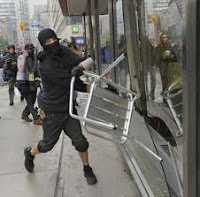 Here I argue that “diversity of tactics” in social justice activism is a misguided effort to unite incompatible sides and that the “diversity of tactics” stance harms the direct action anarchist side and helps the pacifists; where pacifists necessarily support the hierarchical oppressor. [1][2] “Diversity of tactics,” distinct from usual strategic and risk-benefit considerations, is a compromise position between activists that have not only different tactics (direct action versus non-violent) but also opposite views about society (anarchism versus socialism, in the broad sense). This compromise serves the hierarchical system which causes the social injustices being verbally denounced by both groups.

Note that within groups having identified a common enemy or target and a sufficiently common unbearable injustice, determinations of varieties and combinations of tactics and of which individuals will do what are the usual strategic and risk-benefit considerations, distinct from the “diversity of tactics” defined and discussed in the present essay.

“Diversity of tactics” is the position or principle whereby activist groups preferring different tactics of resistance against systemic injustice agree to not get in each other’s way, agree to not interfere or sabotage each other’s different chosen tactics.

It could arguably be stated bluntly as: “Don’t trash me for doing what is needed that you don’t dare do,” addressed to those who don’t agree that it’s needed.

Rabble.ca diplomatically puts it this way [3]: “Generally, those who criticize a diversity of tactics believe that such a philosophy fails to provide a critical analysis of protest strategies that may in fact harm the broader cause. Conversely, those who support a diversity of tactics generally believe that criticism of others' type of protest harms the unity of the movement by undermining solidarity to the benefit of those whose policies and actions the movement resists.” (In the present essay, I argue that those who support it should stop supporting it…)

Following “diversity of tactics,” activists at anti-globalization events (and other demonstrations) accept even fundamentally different tactics arising from opposing views of society [1][2][4] and rationalize this acceptance by advancing that the degree of risk that an activist takes is a personal decision based on a personal evaluation. They do not try to coerce others to take higher risks. They try to not have behaviours which would put other activists at higher risk.

“Diversity of tactics” arose as a response to the tension between pacifists and direct action anarchists. The majority pacifists mostly see the anarchists as a negative force that draws unneeded violent police response and that hijacks media attention away from a positive public opinion of most demonstrators and their cause. “Diversity of tactics” is used as a rallying call for liberal activists to join in accepting more radical methods of protest and resistance as part of an overall strategy. [6]

NOT JUST A DIFFERENCE OF TACTICS

It is a common misconception among activists advancing “diversity of tactics” to consider all tactics as contributing to fighting injustice and only differentiated by level of risk. In fact, direct action and pacifist tactics are fundamentally different both in the underlying assumptions about how societal change occurs and in the underlying beliefs about society’s structure and about how society should be structured. [1][2][4][7][8][9][10]

The anarchists believe that hierarchy itself is the problem and that hierarchy allows concentrated power to generate and maintain social injustices including war, occupation, colonization, economic predation, wholesale exploitation and social engineering. The goal of the anarchists is to flatten the non-democratic hierarchical pyramid as much as possible to provide space for individual agency (participatory democracy, self-organization, decentralized and distributed control of resources and the economy, etc.). [11][12]

The pacifists or socialists (in the broad sense) or “progressives” or liberals believe that justice can be achieved and maintained by the present system of social organization which only needs to be fixed and improved but not by flattening the hierarchical pyramid.

They believe that the system is amenable to being adjusted and improved via opinion input from citizens. They believe that present First World governments can be directed by “critical masses” of citizens’ opinions. They therefore design their actions around “education” (read progressive propaganda), opinion forming, and mass expression via the corporate media, petitions, street demonstrations and so on. They also often have vested interests with workers unions, NGOs, and so on, that are very much tied to the system. Most of the “improvements” they seek involve strengthening the system’s hierarchical control and increasing the system’s legitimacy (e.g., progressive legislation with more control).

In fact, our First World “free and democratic” system is practicing horrendous crimes with virtual complete complicity of First World populations. Canadian crimes include, a continuing genocide against aboriginal peoples [13], a geopolitical war in Afghanistan, support for the US Empire, support for the genocidal and apartheid state policies of Israel, overturning the democratic popular government in Haiti, corporate and finance predation throughout the world, an immoral prison system used to maintain social inequities [14], vast structural social inequities with mass public health consequences, mass civil rights violations perpetrated at will and without consequences for the decision makers (e.g., G20-Toronto), mass indoctrination and pacification of the youth, continual social engineering manipulation, universal pharmaceutical and medical establishment predation … [15]

Since the system is doing this, the system should be stopped, or at least impeded. Since we condone the system by our compliance at school, at work and on the streets every day, we are responsible at least for our own oppressions (wage slavery, financial debt extortion, professional indoctrination, mental environment control, criminalized lifestyle behaviour, etc.). Every time we collaborate with the non-democratic economy and the illegitimate control structures in our lives we strengthen the system and enable its criminality.

Those who do not resist and impede collaborate.

“Diversity of tactics” is an accommodation that saves pacifists from being exposed and perturbed in their collaboration with and support for a violently oppressive system. Anarchists using “diversity of tactics” seek protection from the majority pacifists or seek to at least not be attacked by the “pacifists”. But anarchists are looking in the wrong place for support. The enemy (the collaborator) cannot provide support. The enemy can only provide coercion, co-optation, and elimination.

Collaborators will break ranks with the enemy only to the extent that the heat is turned up. You can’t influence with words alone – the needed words acquire meaning through confrontation. You cannot make revolutionary changes by collaborating and accommodating.

[9] “On the racism and pathology of left progressive First-World activism” by Denis G. Rancourt, 2010.

[13] “A little matter of genocide – Holocaust and denial in the Americas 1492 to the present” by Ward Churchill, 1997.
(Available at Google Books, http://books.google.ca/)

[14] “About the obscenity of the legal mind and its grotesque displays of arrogance” by Denis G. Rancourt, 2010.

[16] “Roundabout as conflict-avoidance versus Malcolm X’s psychology of liberation” by Denis G. Rancourt, 2010.


Denis G. Rancourt was a tenured and full professor of physics at the University of Ottawa in Canada. He practiced several areas of science which were funded by a national agency and ran an internationally recognized laboratory. He published over 100 articles in leading scientific journals. He developed popular activism courses and was an outspoken critic of the university administration and a defender of student and Palestinian rights. He was fired for his dissidence in 2009 by a president who is a staunch supporter of Israeli policy. [See rancourt.academicfreedom.ca]
Posted by Denis Rancourt at 5:40 PM