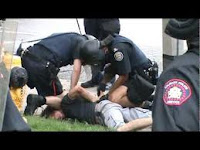 Speakers include Lesley Wood, Syed Hussan and AJ Whithers. Full list of speakers and video statements to be announced!

For ten days at the end of June, the Police led a coordinated armed assault against Toronto’s civilian population. Community organizers were in particular targeted. Mobilizations for justice, for dignity and for self-determination were infiltrated, harassed and intimidated. A Canada wide response is at hand... as people fight to have the criminal charges dropped and to continue the struggle against the G20's anti-people and anti-environment policies. (Support the Legal Defence Fund! http://g20.torontomobilize.org/support)

To understand why people mobilized against the G20 and how organizers were targeted; to hear accounts of police brutality and repression; and to understand the political nature of the bail conditions, the criminalization of dissent and ways to support the people facing charges, join us for an informative panel and discussion.

This event is focused towards activists, grassroots organizers and people who are interested in knowing more and acting in solidarity with local struggles and defendants.

===
LESLEY WOOD is a Professor of Sociology at York University and a member of the Toronto Community Mobilization Network and the Ontario Coalition Against Poverty. Lesley will be speaking about G20 policies, police violence during the summit and the role of global justice movements and community struggles. Read her latest movement article at: http://bit.ly/bT5LdB

SYED HUSSAN is a member of the Toronto Community Mobilization Network and No One Is Illegal-Toronto. He was arrested on the morning of June 26, 2010 and held for 12 days. Hussan will speak about his arrest, bail conditions, and the need for solidarity and ongoing organizing. Read statements from No One Is Illegal at http://bit.ly/9xt45c and http://bit.ly/dkQ8hG

AJ WHITHERS is a member of DAMN 2025 and the Ontario Coalition Against Poverty (OCAP). OCAP is a grassroots anti-poverty organization that faced increasing police repression following mass demonstrations in 2001. AJ will be speak about the targeting of various community groups in 2001 and during the G20 and the need to struggle against the G8/G20 policies in the coming years. Read more at http://bit.ly/bKZfyu and http://ocap.ca/node/904
Posted by Denis Rancourt at 12:52 PM